Following the debacle in mid-July with Great Lakes Endurance folks in relation to the Grand Island Trail Half Marathon, the decision to not participate as a runner in the Porcupine Mountains Trail Half Marathon or any other race organized by the said folks ever again didn’t cost me more than a few brain cells. Contact me in person or in private, if need be, and I will gladly share the details and more importantly, the lessons I learned from the experience. 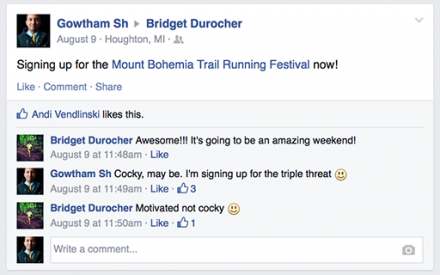 The aforementioned experience meant that two of the ten half marathons planned and paid for were scratched off from the list. With none of the other eight including a single one of the trail category, I was on the look out for an organized event within about 100 miles of home base. And the worst case scenario would have been to do a self-supported run in one of the nearby trail system. Having done one such self-supported run on the road a while ago and realizing the pain (and various logistical nightmares) of doing so, I was rather fortunate (and a lot happier) that dear friend Bridget Durocher chose to put up pretty much exactly what I was looking for, well within the said home base and not in conflict — direct or indirect — with any other pre-planned event.

A similarly themed event earlier in July, Run The Keweenaw: A Festival of Trails, had given more than a good glimpse of what it takes to participate in three races of increasing distance and technicality with limited rest over 30 hours. Assuming that I had done enough since July and hoping that — if survived — I would learn more about the extent to which I can push myself, I decided to sign up for the individual triple threat in Mount Bohemia Trail Running Festival. August was quite a busy month with fun-filled races three of the four weekends: Ragnar Relay Great River with Team SISU in Minnesota and Wisconsin, National Park Service Birthday 10k in Isle Royale National Park and Blackrocks 5k and half marathon in Marquette. Opting to take the entire month of September from racing seemed like and turned out to be a really good decision: it gave plenty of time to get rest, heal some known and any unknown injuries, opportunity to get myself back into timely eating, sleeping and working out (Robert Larson workouts) routine.

It’s hard to estimate the value of training activity #19. Bridget had offered to take anybody that showed up for a test drive of the 10k course a week ahead of time. I am very glad I took her up on the offer, showed up a little early to do a 5k and give myself not enough time before the 10k run — mostly to mimic the race day experience. The mental notes and the information derived therefrom about the course — mostly about the seemingly ending (and some unending) climbs, especially one at the very end known quite simply as the wall — helped a great deal to plan for proper pacing. Making an extra trip out to Mt. Bohemia the night before the race to pick up the bib (for myself and dear friend Cassie) helped get an extra hour of sleep.

The morning drive to Mt. Bohemia on race day was just as uneventful as the night before and was surprisingly punctuated with barely any traffic. The drizzle chill became a non-issue as soon as the 5k, first of the three races for the weekend and first of the two for Saturday, got underway. Trying to strike a balance between the need to push to finish the 5k under goal time and the need to conserve some energy for the upcoming 10k proved more difficult than I had imagined. Each bend and climb seemed to teach a lesson or two, and the most important lesson of them all came during the last big down hill descent: that I wasn’t very good going down a hill, and that I was much better at going up a hill. All said and done, about a two minute lead I had (over the last place finish) before the beginning of the downhill had turned into a 00:01:50 deficit by the end of it. In spite of finishing under the goal time of 0:39:00 and in spite of running up the wall to the finish, I found myself dead bleeping last amongst runners participating in individual triple threat category.

15-20 minutes between the end of 5k and the start of 10k was just sufficient to warm up, hydrate and get some rest in the cozy confines of the main yurt. Through the first two miles of 10k, it seemed like I would not only not catch up to third place (first two places in individual triple threat were far beyond reach, given my current ability and skill set) but actually trail by even more time. Shortly after mile two, something changed and I am not really sure what it was that changed — but I didn’t feel the need to stop even once, kept a decent pace during most of the uphill climbs, managed to go down the aforementioned big descent much much faster, and more importantly, built enough separation to ensure what happened about an hour ago didn’t happen again. Running up the wall again near the finish proved to be a good decision and helped cut the two minute deficit (to not finish last overall) by 00:01:20.

An uneventful drive back to Houghton, a hearty meal in Rodeo Mexican Kitchen, an hour’s worth of napping and yet another hearty meal at The Fitz with dear friends were the highlights of rest of the day before I called it a night. Drive back to Mt. Bohemia on Sunday morning was about as uneventful as possible. With my body feeling not nearly as sore as I was expecting to be (may be a good sign?) and needing at least 00:00:30 to ensure a not last place finish, the half marathon got off to a decent start as well. But just like it had happened about 24 hours before, the downhill turned to be my Achilles’ heel. Whatever time I had gained before the beginning of the same downhill not only disappeared very quickly taking much of my hope with it but compounded my misery by adding more deficit in spite of running up the wall yet again by the end of 5k.

It took me a little over another mile before I felt the lost hope showing signs of some return, and I was able to stay within 50-75 feet of part one of a two part goal over the remaining distance. With the legs feeling much heavier, the separation distance that way for the next 2.5 to 3 miles until the beginning of the exact same downhill that had brought be so much pain over last 24 hours. With less than five strides keeping me from completely catching up, I chose to take a bit of risk and pushed myself to keep pace with the fast downhill runner. And the risk had paid off by the time I was at the end of that downhill stretch, and all that was left to accomplish was the part two of the aforementioned two part goal: build a lead of at least 00:00:31.

Thoughts seemed to come easier than action especially once course had left the trail and rubber literally met the road. Not stopping to get water at the last aid station seemed to give me a few vital seconds of lead but certainly not enough to get out of the last place finish. Soon the course made its way back onto the trail towards the wall, and I chose to pace myself, conserve some energy for that one last big push. It was nice to see many a training runs — many mostly uphill and just about every one of them finishing with some sort of uphill at the finish — pay off at just the right time: I was able to run up the wall for one last time (and for the fourth time in about 27 hours) and finish the half marathon with a time of 2:40:42. Dear friend Lauren pacing me over last many strides to the finish line also marked my first ever such experience. The time was good enough to earn a separate goal I had in mind for this leg of the race: finish under 2:45:00. And 80 seconds or so later, my time had achieved the overall goal I had for the race of not finishing last amongst the individual triple threat participants.

Post-race activities included the awards ceremony that included being introduced as representing the Keweenaw Running Group for my first podium finish in trail running category. The return drive home — with a satisfaction of earning successfully completing the most strategized running event I’ve had the good fortune of being a part of — was also uneventful. I hope this Mt. Bohemia Trail Running Festival will help prepare my legs for the Detroit Free Press Half Marathon two weeks later, and Madison Half Marathon three further weeks down the road to end the 2014 running season.