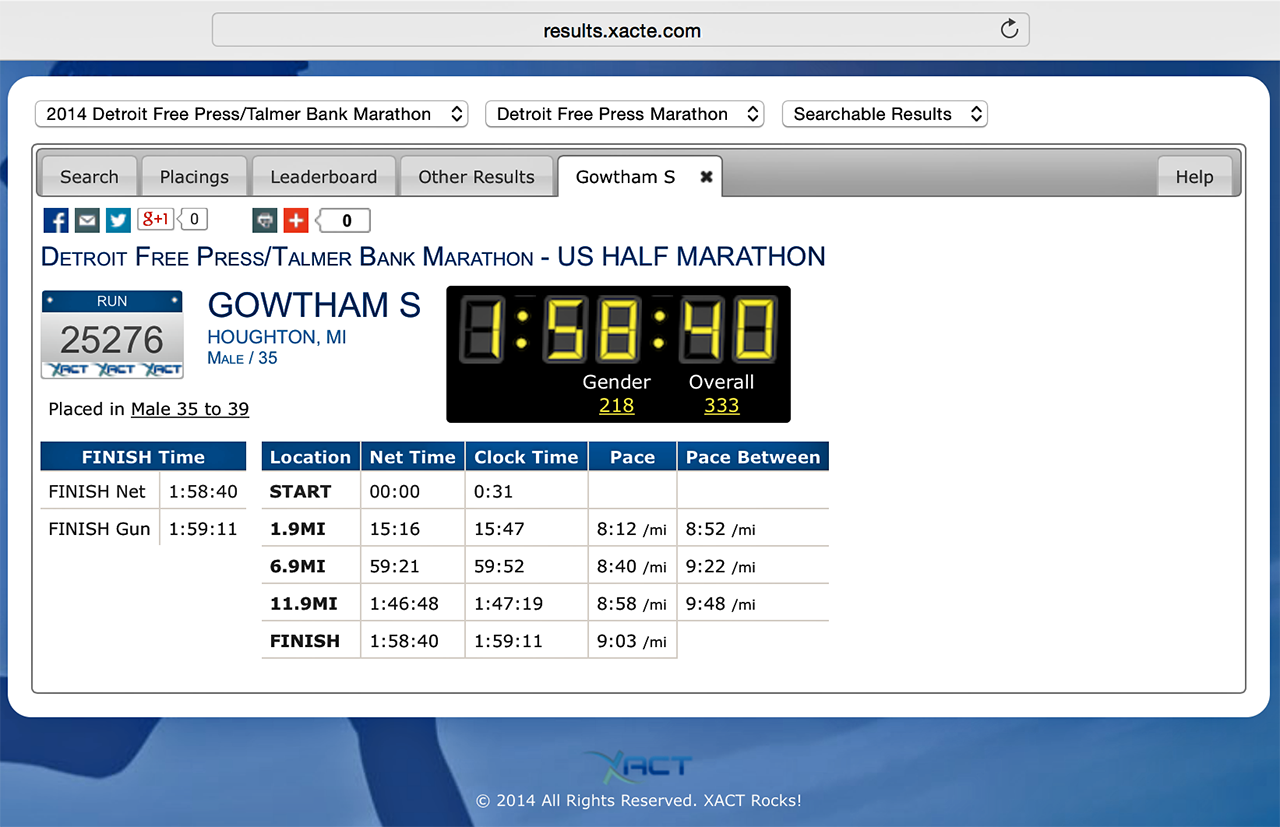 It was a chilly chilly day many many moons ago in February, and I was on my way to Ashland, Wisconsin, with dear friend Bryant to participate in my maiden cross country skiing race: The Book Across The Bay. Couple hours into our drive and almost near the Black Cat Coffeehouse, the Facebook app on my iPhone became the platform for a very brief conversation with dear friend in lower Michigan, Jess. 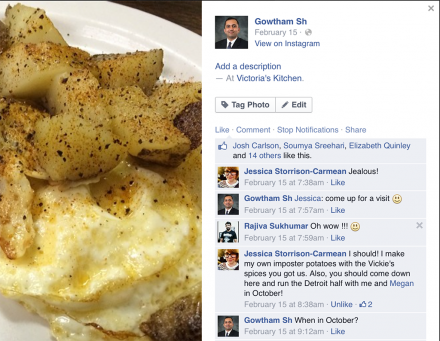 I am not really sure how the conversation went from Jess admiring Vicky’s seasoned potatoes to me being convinced to sign up and run in Detroit Free Press Half Marathon with her eight months down the road. I had just completed the Kaiser Permanente San Francisco Half Marathon, and I hadn’t even dreamt of participating in as nearly as many half marathons I have come to do in 2014.

Fast forward a week or so and an email exchange with the organizers to resolve my middle name crisis (I don’t even have a last name, where was I to produce a middle name from, eh?) and an additional email exchange with my immigration attorney to make sure I didn’t leave the country as part of the International Half Marathon (leaving the country wasn’t the problem — it was the getting back in), I had indeed signed up the US-only Half Marathon – for what I thought would be the third half marathon the calendar year. 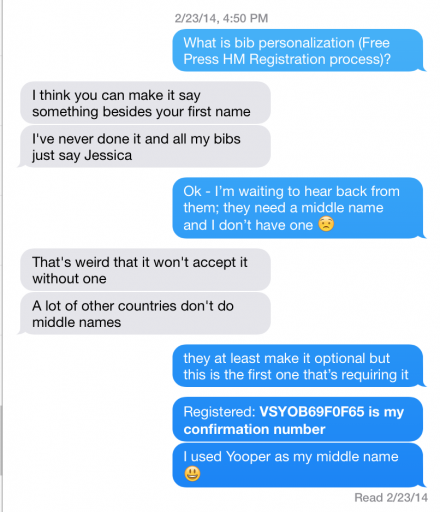 Mount Bohemia Trail Running Festival organized by dear friend Bridget Durocher was good to me in more than one way — one, helping me realize how far I could push myself; two, teaching me that being disciplined was far more important than being purely motivated; and, three, preparing my legs for this race. About two weeks time between the two races gave more time and opportunity to stay on track with timely eating, sleeping and working out (Robert Larson workouts) routine.

I had made the mistake of multi-hour drive/ride to the event location (or its neighborhood) in some of the yesteryear events — Madison and San Francisco. Given the amount of training miles I had banked prior to those events (or lack thereof), it’d be a crime to blame my performance (or lack thereof) in said events on car legs. It’s only now, knowing what I have come to know and with a little more training miles in the bank, that I know that car legs could be a factor on race day.

Starting to pack a few days ahead of time was a good idea as the planned time off from work during later parts of Thursday didn’t necessarily work out as planned. The uneventful journey to the lower peninsula, to Jess and Tim’s in Ann Arbor, started early on Friday and was punctuated only by stops for fueling (me and the car), some scenic stop overs every 75-100 miles to stretch the limbs, and chat with a dear friend from the Mackinac Bridge Authority (that had helped get to a good vantage point to photograph The Bridge a few years ago) who happened to be working the toll booth.

Just about every road trip since mid August, when Shannon introduced me to the concept of audiobooks, has felt much shorter — at least the driving part of it. While listening to the book has been helping me get more books off my reading list, it has been slowly improving my language too. With this being the longest of such road trips — at a little over 11 hours each way — I saw no reason to change that habit. The unabridged version of audiobook I chose happened to be a physical book that I barely made any progress on and I had completely listened to the abridged version: When Pride Still Mattered (iTunes | New York Times review), a work by Pulitzer prize winning author David Maraniss. The gripping narration of an ordinary man’s extraordinary life made the round trip seem a lot shorter — a LOT shorter. 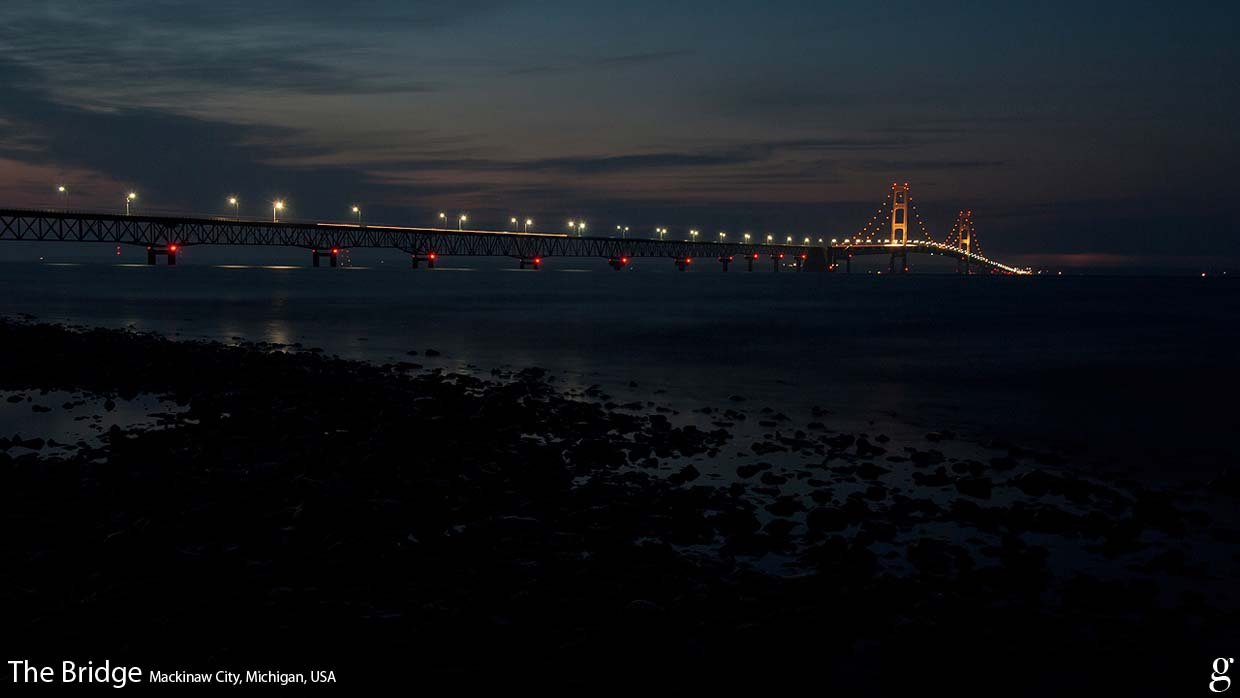 One doesn’t have to be a Packers fan or even a fan of American football to appreciate his life, struggles, accomplishments and teachings. I thought and I knew that I knew a lot about this man — including much of his life, struggles, accomplishments, and teachings — through other readings and watching a two part documentary on as part of NFL’s A Football Life series but a more than a lot more was learnt about him (and people in his life) in 20+ hours of listening during this trip. The closest I ever come to meeting him was in Mt. Olivet Cemetery in Middletown Township, New Jersey, nearly 40 years after he was laid to rest — during my brief (and mostly unhappy) stint in AT&T. The book has done little to change my never to be fulfilled desire to have met him in person, and and I hope to learn some more in the remaining eight or so hours over the next few days. For one of the only times in my short running career so far, the race day morning came at a normal pace. We (Jess, Tim and myself; Tim did all the driving) left Ann Arbor shortly after 5 am and beat the traffic to find an empty spot in a parking complex not too far from the start/finish area. The race — with nearly twenty thousand participants including all categories, and at least an equal count of family, friends, organizers, volunteers, officials, etc. — was by far the biggest such event I have had the opportunity to be a part of. The mass of humanity — just about every one of them friendly — was a sight to behold, and the rendition of Canadian and US national anthems was a sound to behold. It wasn’t too long after Jess had gone to her corral for the start of International Half Marathon that Tim and myself wandered off towards the Renaissance Center in search of warmth and some coffee.

We (Tim and I) seemed to have shown up in the Starbucks in Renaissance Center just in time for no sooner had we sat down with our oatmeal and coffee than the line got quite big. As 9 o’ clock hour approached, we headed back to the parking complex so that I could wrap up my pre-race preparations and walk back to the finish area to see Jess come across the line. Shortly after the first two marathoners finished within a matter of seconds, I started my walk towards the US-only Half Marathon starting line. I felt and believed that the map (and many of the volunteers/organizers) could have been more informative (and informed) as the start of US-only Half Marathon wasn’t within a trivial distance from the overall finish area. I guess preaching the undergraduate students in UN5390: Scientific Computing I to start early and ask frequent questions had the desired effect on me, and I got to the start area with plenty of time to spare.

One more rendition of the US national anthem, and the race started at 10:30 am. I found the 1:55:00 pace group to start but felt good enough to lead that group by a minute or two through the 11 mile mark. The organizers did a phenomenal job in setting up the aid stations at the right places, law enforcement officials and volunteers in controlling the traffic, and the community in cheering on as well as setting up many a beer only aid stations. Garmin’s much acclaimed HRM-Run monitor was quite useless past the 5 mile mark as it stopped transmitting any data.

Much of the course was flat — very very flat — when compared to the fortunate training grounds of the Yoop, and helped keep my pace for every mile under the 10:00 minute mark. Everything seemed to go well and as planned and a finish under 1:52:00 seemed well within reach. But the pace started to drop — still under 10 min/mile pace — shortly after the 10.50 — 11.00 mile mark. The 1:55:00 pace group that I had comfortably been leading by 2-3 minutes passed me for good around the same time. I walked a little more than my liking over the last few miles and it took a “hill” to the final stretch to get me running at normal pace again. All said and done, I finished in 1:59:06 according to my GPS (1:58:40 was the official race time).

And for one of the very few times, I remember not being my miserable self after crossing the finish line for not doing as well as I could have done. A quick thank you to the heavens above, a fist pump and a high five to volunteer just past the finish line, I found Tim to hug. After a quick stop in the official race gear shop not too far, we gingerly made our way back to the parking complex and started our drive back to Ann Arbor with a stop for lunch in bd’s Mongolian Grill. Rest of the Sunday afternoon and evening included much of the same pre-race routine: rest, dinner in Shalimar with Jess and Tim, and sleep. It took the timing folks quite a bit of time and effort to get my time and standings right — first, they had me finish at 1:46:48 with 6th overall and 4th amongst men; then, they got the time right but rankings were way off; finally, got it right after about 14-16 hours.

After yet another night of sound sleep powered primarily by the satisfaction of a first ever sub 2:00:00 finish, journey back to the Yoop was slow but uneventful, punctuated with many scenic stop overs, and a brief detour to Rose City to meet the Schneiders (Susan, Bruce, Sarah, Scott and Aubrey). I hope to rest for a couple days and then begin fine tuning anything that needs fine tuning to finish the last organized race of 2014 running season, Madison Half Marathon, three weeks down the road on a high note.