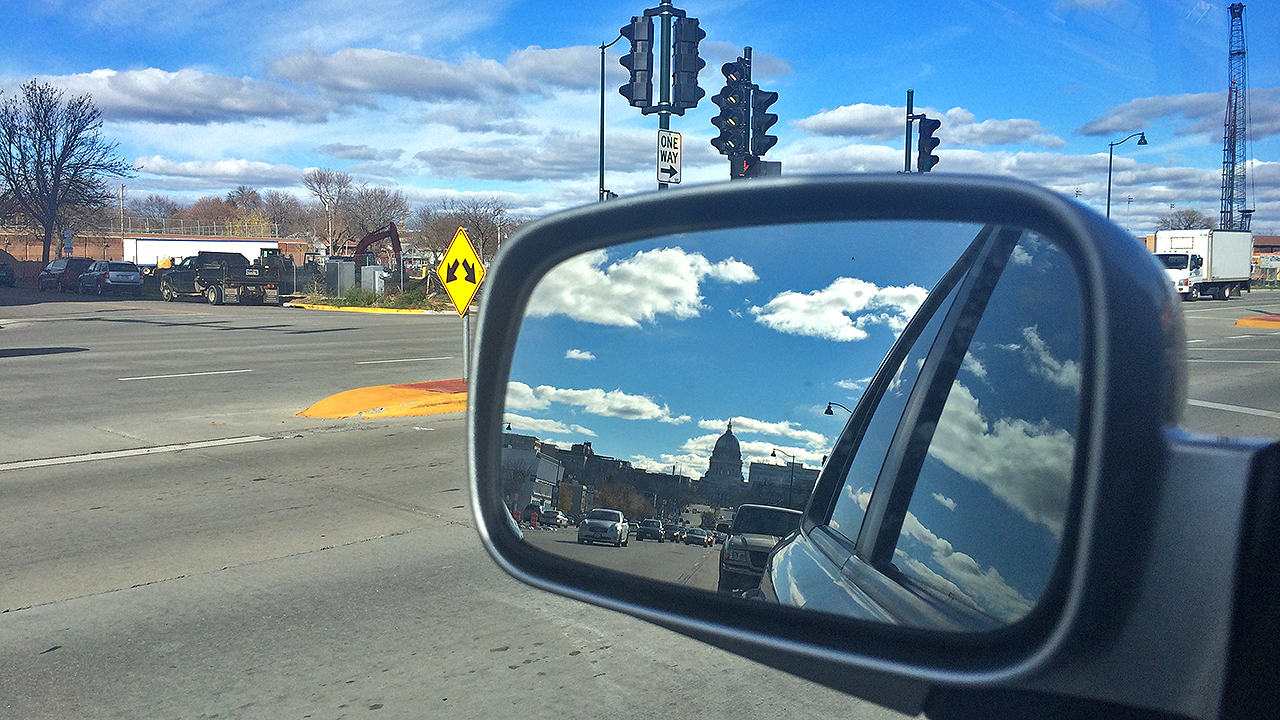 The decision to participate and do better in the 2014 edition of Madison Half Marathon was finalized several strides before I had even finished the 2013 edition. Support from dear friends, organizers, volunteers, law enforcement officials, members of communities and neighborhoods through which the course snaked around was quite overwhelming even though much of it seemed undeserved (by me) and unrewarded (to them) given the lack luster performance from yours truly. So, I did officially sign up for this edition on new year’s day.

All I knew then, as did I when I was approaching the finish line with clock ticking past 2:43:xx, was that I had to find ways to do better in 2014 edition — much much better than 2013, and that Madison Half Marathon, as it was in 2013, would be the last half marathon of 2014 calendar year. Additionally, a very well done interview by Deborah Proctor from Focal Flame Photography served up a bit more motivation to do well in what would be the first out of state race in the redemption series (first one, and first in state race was the 2014 Hancock Canal Run Half Marathon). As with the recent trip down to Motown for the Detroit Free Press Half Marathon, audiobook yet again made the 6+ hour drive to Monona, WI, feel a lot shorter. The book of choice was Steve Jobs, an authorized biography written at the request of Jobs himself by Walter Isaacson. Staying with dear friends — Karen, Adam and Fanny — involved hanging out, catching up on what life has brought our way, hearty and delicious food (Mexican meal for Friday dinner in Eldorado Grill and homemade cranberry orange baked oatmeal for Saturday breakfast), herd of Spotted Cows (a New Glarus Brewing Company product) to bring back to the Yoop and plenty of rest.

Pre-race expo at the Monona Terrace Community and Convention Center was a little underwhelming — probably due to no fault of their own but of mine, basing my expectations from experiences in Detroit. Checking out every booth didn’t make much time but I did find a few things I was looking for: lights and lightweight reflective gear for running during darker times, muscle roller stick (it came with a free massage!) and a metallic panel of hooks from Sport Hooks LLC (a really crappy looking website but an excellent and sturdy product made in Waco, TX). Wearing the Ragnar Relay gear also earned me an authentic Ragnar doozie, bottle opener and keychain from one of the running groups.

A 90 or so minute uneventful drive took me to Colgate, WI — to the new home of Chelsea, Nils and Rosko. Stocking up on some awesomeness from the aforementioned New Glarus Brewing Company (you know, winter is long and hard and cold up in the Yoop. Well, not necessarily hard but the unnecessary over-dramatization provides a valid reason to stock up on quality brews), and enjoying a homemade spicy wild rice soup with vegetables with friends highlighted rest of the afternoon and evening before I hit the sack around 9:30 pm.

For the second time in as many events, the race day morning came at a normal pace. Waking up around 4:30 am with my iPhone indicating mid 30s for temperature and more than a decent dusting of snow wasn’t a surprise given the time of the year and my notes from a year before: it was knocking on 80s the day before and rain/snow/sleet the day after. Given that, I would choose the latter any day for a long run over the former, let alone for a half marathon. There was some debate in my head with regards to the choice of clothing and potential change given the information I had about current and predicted weather conditions. All said and done, relying on last year’s experience (when the Sun came out and clouds made way to blue skies with a gently warmer temperatures three miles into the race) I stuck with the originally planned outfit — a single layer above the waist and couple thin layers below.

For the second year in a row, Chelsea and Nils drove me to the race. Considering 2013 edition had more than a handful of friends who did the race (Chelsea, Nils, Kevin, and Alicia), it felt a little different to be doing it alone. Following yet another beautiful rendition of The Star Spangled Banner, there wasn’t a whole lot of time between the start of full marathon and that of half marathon, and the starting chute — not big by any stretch of the imagination — filled up very quickly. With near zero wiggle room in the said chute, I didn’t/couldn’t make it to the right pace group in time for the start of half marathon. The race started on time and any hopes of getting to the right pace group were dashed by single lane closure for the the first couple miles. With as many runners as there were in this race and with oncoming traffic in the other lane, it was near impossible and at times dangerous to pass fellow runners.

The first mile took seemingly slow 9+ minutes and any time I gained over the second mile was by running through pile of dry leaves and on sidewalks. By mile three, the makeshift gloves (a pair of used socks with hand warmers in them) had made my upper extremities quite warm and they, along with a $1 winter hat from Wal*Mart had become disposable. Shortly after the 10k mark, at which time the pace (8:35 min/mile in 53 minutes) seemed acceptable, the course started opening up to Lake Mendota. However, I seemed not to maintain any kind of consistency for rest of the course and the overall pace kept dropping with every passing mile. The 10+ mph cross- and head-winds off the lake dropping the mercury to ~30 F probably didn’t make it any easier. And there might have been some contribution from a modified course as I didn’t really know when the hills were coming up and when it was flattening out.

When 13.1 miles were behind me and as I strode through the finish line, elusive sun was still hiding behind the thick cloud cover, I was cold, it wasn’t the finish I had hoped for as the clock showed a few ticks past 2:00:00 — about 90 some seconds shy of what would have been a 6th PR in 2014 for this distance. Being not miserable only lasted for one race as a plethora of thoughts went through my head: Did I train enough? Did I over train? Should I not have eaten a small box of french fries from McDonald’s yesterday? Should I not have skipped a short run last night? Should I have listened to the voice in my head and dress warmer? Should I have kept the makeshift hat and glove for few more miles? Would I have done better had the organizers not changed the route? and more. I don’t know the answers to most of these questions except the last one: had they not changed the course and shielded the runners in the friendly neighborhoods, runners would have been exposed to the more open expanse of Lake Monona for longer stretches, and I certainly would have taken a LOT longer to finish. Walking gingerly to exit the finish chute, I had a chance to few fellow racers that looked like elite runners and had dressed much warmer. And each one admitted to finishing about 20-25 minutes slower than their usual race times and everyone attributed the drop in times to the weather. The last few steps before I found Chelsea and Nils were occupied with thoughts of letting these two down by not earning a PR for the second time in 2014. My answer to their question of how I felt — cold — was an honest one, and their response — we haven’t seen anyone not cold so far, and we have seen a lot of people finish the race today — was very comforting.

Rest of the Sunday afternoon was spent first napping in the truck as we drove back to Colgate, and then contemplating mostly on my performance and finding ways to be satisfied with it while Chelsea and Nils attended to Rosko’s needs. On one thought, I wanted to believe that there was more to numbers than what they indicate — especially with the weather the way it was and the way I chose to dress and that I hadn’t realized I had muscle cramps due to cold. On another thought, I know I am what my record says I am. But in the end, albeit taking a while to do so, I did realize that missing a PR and missing it by 90 some seconds wasn’t the worst thing that I could have done today, and that this performance (or lack thereof) could be used as a motivation to train better for and do well in 2015 season.

If I may be allowed to make a few recommendations to the organizers of this race, though I am not sure if they would ever read this even if I was allowed to make some, they’d be the following:

The night ended with trip to New Berlin, WI, to see and hang out and spend some quality time with the Obermanns (Catherine, Tim and Maxwell). And the trip ended with a drive back to the Yoop on Monday — initially in rain and mostly in progressively worsening snow fall, and it took a decent chunk of yet another audiobook Einstein (by Walter Isaacson) and his special and general theories of relativity to make it seem shorter.