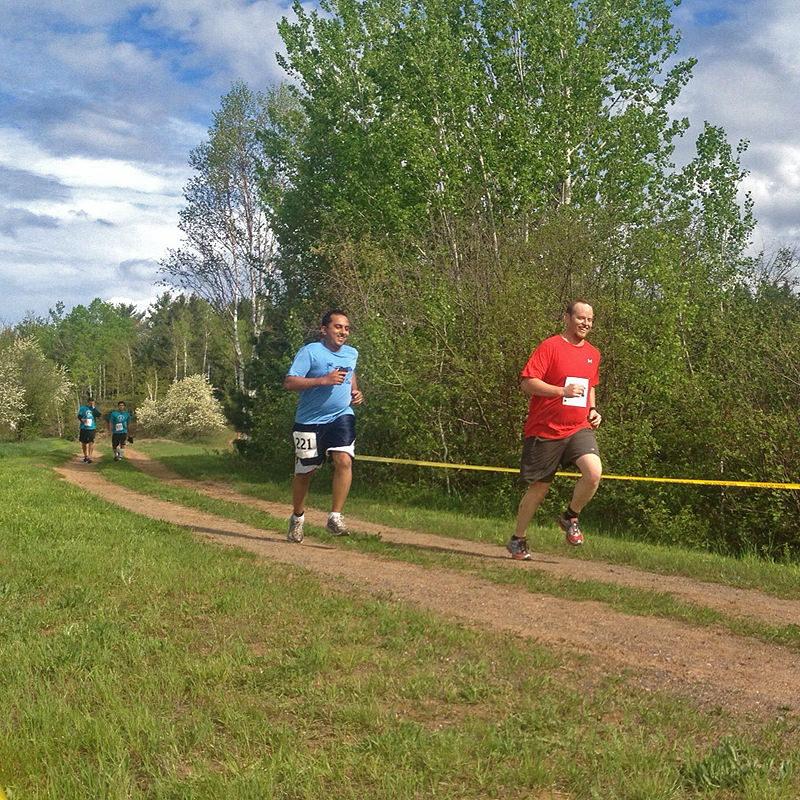 It has been quite a while since I raced in a race of any kind — the last one being nearly three years ago, the 35th edition of Hancock Canal Run. Life has changed quite a bit since then — for I have been watching my figure (grow) and weight (be described by a monotonically increasing function with time), and then again, much of it has stayed the same — for my mind has sowed the seeds of running in other races, and then failed to follow through while blaming the body for procrastination. Hancock Canal Run in itself came and went twice, so did Journey’s in Eagle River, WI. Keeping the name calling business to a minimum, I shall not mention several other races and/or running groups that I failed to register and/or participate.

About a month or so ago, I finally started running: the first attempt defining the act of running in as loose a form as possible. But the awesomeness of the community I get to so proudly live in chipped in and did its part in finding ways to not let my mind repeat its prior mistakes: some phrased it nicely while others were of the matter of fact & kick in the pants way; some shared their vast expertise about running, while some others stressed the importance of rest — something that I have almost always chosen to ignore or at least haven’t taken seriously enough. The pace seemed only have improved temporarily, but I seemed to cover more and more distance with each subsequent attempt.

I had recently signed up to run a half marathon as part of the upcoming 38th Hancock Canal Run and training towards it for nearly two weeks, when a dear friend & colleague described in great detail about the then soon upcoming Breakers to Bay Race. Stories from her and other friendly residents of Stanton Township that frequent a famous watering hole in Houghton was more than sufficient to not only make me sign up, but to train consistently and complete in under an hour.

As with the race itself, things didn’t go as well as I had hoped for — having nearly four 10 lbs bricks worth of additional mass and having three too many lime dipped beverages the night before that may have messed up the sleep schedule (continuously buzzing Northern Lights alerts through out the night didn’t help either), unexpected sunshine and increased levels of humidity as the race started, uphill climb for the first couple miles (some of which seemed deceivingly flat while scoping out the route yesterday, in a car, with a dear friend; some of which were missed by us because the route on the registration form was missing them as well) — and took nearly 25 minutes to cover the first two miles. I wouldn’t be surprised if much of what I sweat in these two miles was the aforementioned lime dipped beverages.

Thanks to another dear friend and colleague (and thanks to his cushiony pair of shoes that I ran in) sacrificed his own pace and timing to help pick up mine, I kept up a consistent pace to pass the finish line at 59:40, about 20 seconds shy of the goal (thanks to SuperiorTiming for the timing chips and measurements). Detailed summary of the run with speed and elevation profile as a function of distance, thanks to RunKeeper app on my iPhone and WP GPX Maps plugin for WordPress, and some photographs are below:

As mentioned in the beginning, a lot has changed since the last race but then again a lot has remained the same — plethora of friendly faces at the event; unexpected, undeserved, unrewarded acts of kindness from just about every one of them; somehow managing to finish the race within the set time goal; and surprisingly still being on track to perfect the art of finishing almost last.