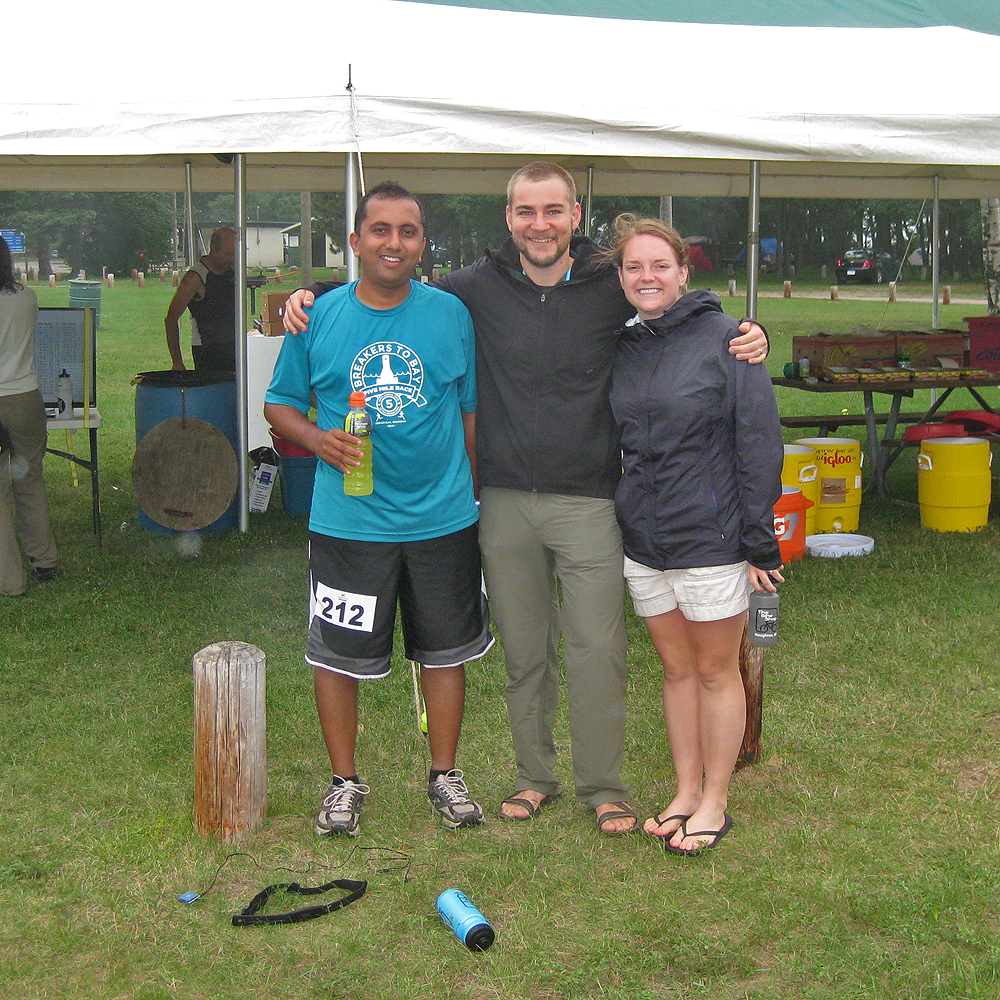 In an attempt to ride the momentum, if one could call that, that I had gained in the past six months of occasional running and participating in more than my fair share of organized running events — 5 mile Breakers to Bay, 10k Hodag Run, 6k Mt. Baldy Summit Run and a Half Marathon as part of Canal Run — I had run few more times, I had made up my mind to run the Porcupine Mountains Trail Half Marathon in October and was eagerly looking forward to another organized event in September. On one fine day in July, while enjoying a fine beverage in a fine watering hole, dear friend Kris mentioned about an upcoming XTERRA Marquette Epic Triathlon and should our friend Greg (a much much better runner than I am) be not able to make it, I would be in as part of Team Winston. 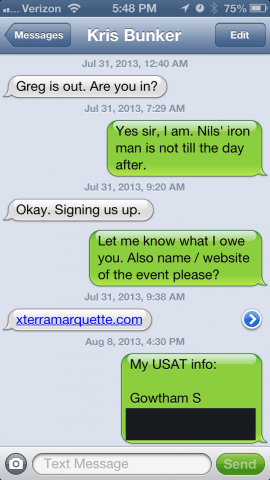 Except for having seen several triathlons before — Yooper Sprint Triathlon in 2013; several editions of Copper Man — and a plethora of awesome friends compete in and complete them, either individually or as part of a team, my experience with triathlons at any level is as close to zero as one can get. Once officially committed to and signed up, I did train some: two really long runs (a 11 miler with Nancy and Josh, and a 13+ miler with a fair amount of hills) and one short run (a 4 miler to the end of US41 and a 2+ miler part ways up the Brockway Mountain).

The usual carb loading at Rodeo Mexican Kitchen with friends, and staying off of alcoholic beverages ensured that I was well prepared but a bit of unscheduled and unforeseen work kept me in Houghton the night before the race, thwarting my plans of getting a good and full night of sleep in Marquette. Driving 100+ miles in the wee hours of the day, I made well within the scheduled closing of transition area, met up with Team Winston and had numbers painted on my body.

The events started on time and veterans of Team Winston, Kate and Kris, did a fine job: Kate taking a hair over 30 minutes for a mile long swim, and Kris completing 30 miles of mountain biking, in not the best of health, in under 2:30. If only I had paid attention to friendly advice of Josh, Nancy and Amy, and studied the elevation profile for the 10 mile trail run course a bit more carefully, I would have been well served. Lack of information on the event website regarding aid stations and their location only added to my woes. The course turned out to be about 6.5 miles up and 3.5 down (as opposed to my imagined 5 up and 5 down), and the only aid station was at the 6.5 mile mark – leaving me with little to no water. However, a bright and sunny day had made way for one with cloud cover, gentle breeze and a slight drizzle – making the uphill climb a lot less worse than it would have been otherwise. The course also meandered through rugged yet scenic back country in Marquette Country, parts of it along the North Country Trail.

Timing was a courtesy of friends at Superior Timing. Apart from maintaining an inconsistent pace as indicated by the speed and elevation spectrum below (thanks to Garmin Forerunner 405CX and WP GPX Maps plugin for WordPress) and costing Team Winston a better than last place finish (I had the worst T2 time of 41 seconds and I had the worst run time of 2:27+), it was quite the fun and educational event: fun in that I had the opportunity to be a part of the event, hang out with old friends [Greg, Jen, Kara, Justin, Chris, Maria] and make newer ones [Craig, Adam, Sarah]; educational in that it taught me things I hadn’t cared to learn about triathlon (let alone team triathlon), the value of a post-race hot shower & a good night’s sleep and exposed the desperate need for a better training regimen.
© OpenStreetMap contributors

Post-race activities included a maiden visit to The Pasta Shop for an excellent dinner sandwiched between maiden visits to Ore Dock Brewing Company and Blackrocks Brewery in the fine company of the Bunkers [Kris, Kate, Karen and John], Greg, Craig, the Resslers [Tom and Dee], Alex and Jason – before heading back to Houghton to take care of some work related issue.

Given that this is the first edition of this event in Marquette, organizers did a pretty decent job. Number of people registered and number of volunteers seemed to be quite less. If I may be so arrogant as to offer some suggestions for next year, it’d be to have more volunteers, provide more information about the location and number of aid stations, potentially put a time limit for completing the race and have a professional photographer or two to document the proceedings.

The fact that there is quite some pain in my quads almost 18 hours after the completion of the run but not as much as I had after the Canal Run Half Marathon is probably an indication that intermediate training runs have been productive but leaves no room to imagination that there is as big a room as any for improvement. Hopefully continued runs that incorporate serious hill climbs, runs that are more frequent than just the ones over weekend, disciplined eating and sleeping habits … will prepare me better for the next organized event about four weeks from now.