Some winters ago, in a conversation with my buddy Adam Griffis (he took up social media distancing well before the social distancing became a thing in recent times) that most certainly involved good food and a fine beverage, we had an idea: ski 5 kilometers in every one of our trail systems in the Keweenaw while stopping for nourishment at our favorite local dining establishments in one day. Plagiarizing the name of another well-organized trail running event held in July, Run The Keweenaw, A Festival of Trails, we gave it a very unimaginative name … Ski The Keweenaw! I remember us being honest in our intentions: this was not just about skiing but using skiing as an excuse to enjoy good food and fine beverages – hot and cold – throughout the day! 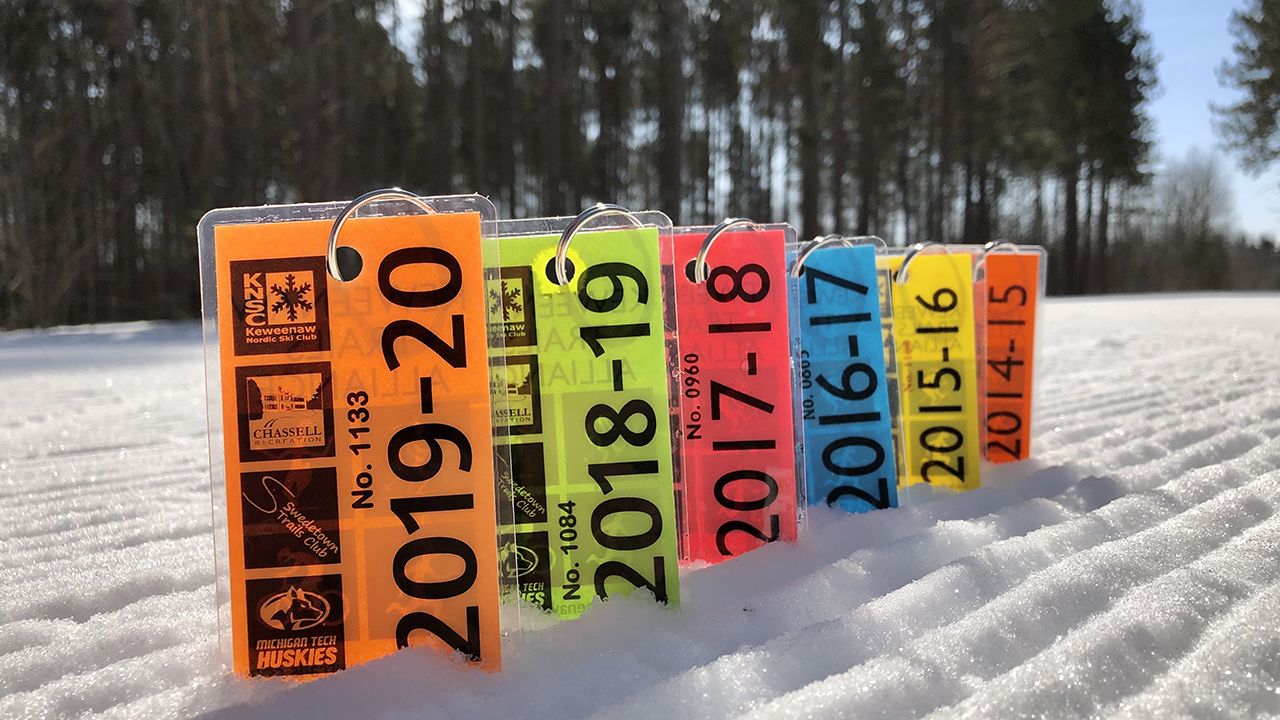 Winters came and went (I won’t admit to how many but you can get an idea by counting the number of annual ski passes I have bought), and so did my excuses for keeping this plan on paper – trails are too technical, I am not good enough for this project yet, the next weekend looks like a good weekend to do it, trails are too icy, they stopped grooming, trails are to soft, it’s too cold, it’s kinda warm, winter’s over, next winter will be the winter this project comes to fruition … just to name a few. 2019-20 winter showed no signs of being any different. More so because I had a very valid excuse – that I was training for a Spring marathon and needed to focus on running. On 2019-12-14, the sixth day of the first week of the said marathon training period, I got to ski with Mike Young (he’s the race director of the aforementioned Run The Keweenaw). During that outing in Maasto Hiihto Nordic Ski Area, I explained my hibernating plan to Ski The Keweenaw and how I might not be able to do it until 2020-21 winter. He liked the idea but politely disagreed with my excuse … his thought was that my skill set was good enough to ski every loop/trail in every trail system in the Keweenaw. I was grateful for his belief and confidence but I still didn’t think the project’s fruition was on the cards in 2019-20 winter.

But then COVID-19 came around and things changed. Keeping in line with The greatest good for the greatest number for the longest possible time philosophy that I so am in love with, organizers of the Spring Marathon diligently postponed the event to the second half of 2020. That meant I could temporarily pause the race-specific workouts (i.e., speed, tempo, race pace portions) for the next few weeks and revert to general aerobic base building. Remembering Joan Benoit Samuelson’s interview after her 2019 Boston Marathon and the lessons from my friends/mentors in the community, cross country skiing would provide a full body workout and help build aerobic base with lesser impact on joints. I am lucky enough to live in an area with several top-class nordic trail systems and thanks to the respective parent institutions/governing bodies, the trails are being meticulously groomed, tilled and tracked, and just as meticulously documented in Keweenaw Trails. If nordic skiing was/is good enough for Joanie and for my friends/mentors, I figured it’s gotta be good enough for me. Maybe this will help me in my marathon project down the road when the time and opportunity arrive.

It’s nearly impossible to articulate the combination of overwhelming emotions that many of us have been experiencing while the humanity has been going through a global pandemic. I have the good fortune of being able to work from home and maintain good health. In the grand scheme of things, nobody would/should care whether or not I completed this silly little project – 2019-20 Ski The Keweenaw. But getting out of the house to find some fresh air and think through things became a refuge – a necessary act to preserve and gain physical and mental clarity/sanity. It was/has been more of time to pray than just time to play. A lucky byproduct of this exercise just happened to be completion of 2019-20 Ski The Keweenaw. 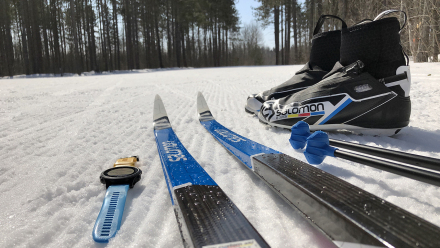 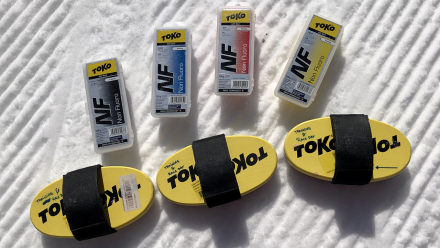 My first exposure to the wintery side of Chassell trail system was shortly after Thanksgiving … riding in Señor Tervo’s snowmobile lopping branches/shrubs and stopping at his casa for a yummy grilled cheese sandwich on homemade bread along the way. It’s easy to get lost (not literally; the trails are very well marked) and lose track of time as the narrow, classic-only course winds its way through the canopy of tall Pines as well as expansive fields. I am not a mountain biker (yet?) but Mike Young’s description was that the Chassell Trails are for skiing what a single-track trail is for mountain bikers. A goal for the 2020-21 edition would be to start earlier in the day than 4:15 pm – as the ambient light diminishes quickly as soon the Sun starts going down. 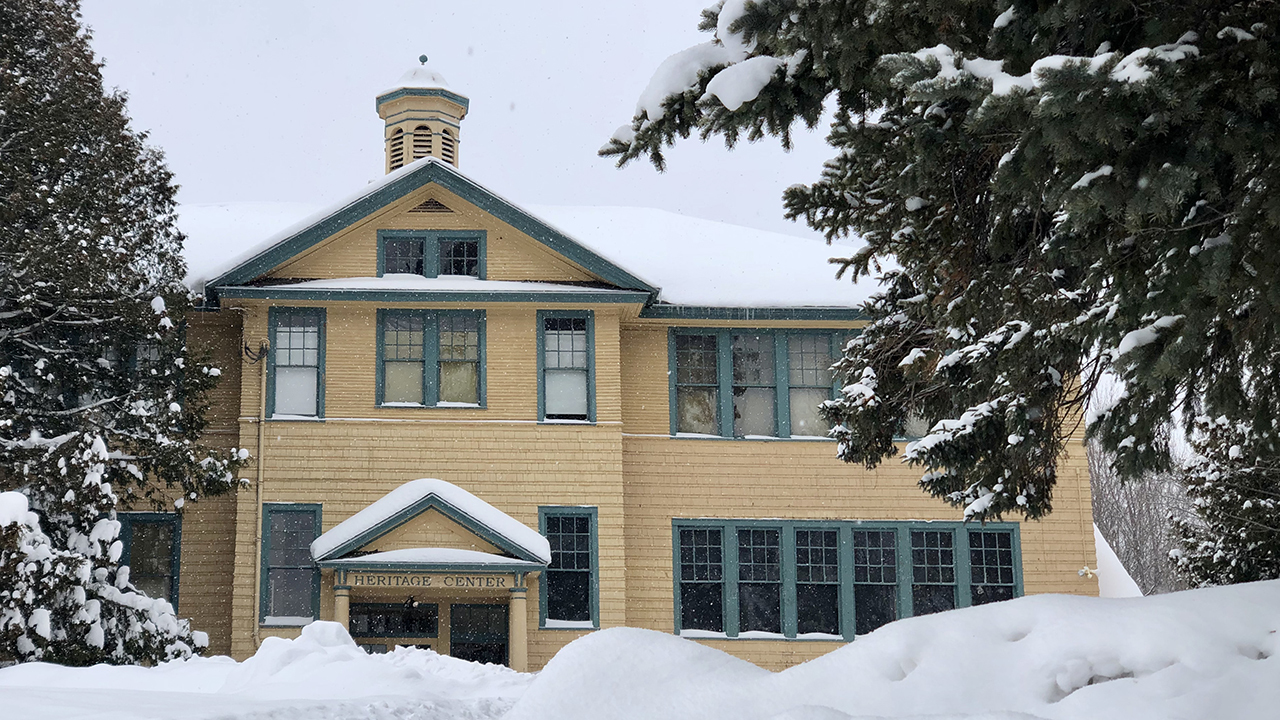 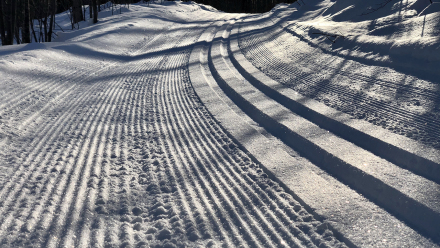 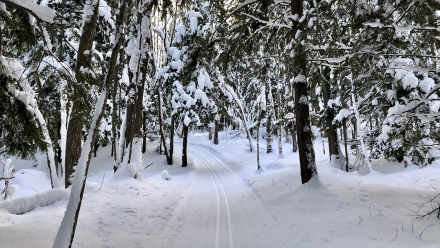 I had skied every loop/trail in this system in 2018-19 winter and one of the first ski outings of 2019-20 winter had taken me through all but the Flamingo Hill loop. I do love the variety of trails in this system – from mostly flat expansive ones to hilly portions that whip our behind into shape. For as many automobiles one might see in the parking lot or people in the chalet, one seldom encounters anyone on the trails … off of Valley Trail. As an added bonus, a vast majority of these trails/loops are part of the 25 km/50 km Great Bear Chase course. So, it never hurts to get to know these trails and their local geography better. Truth be told, this outing was supposed to be an easy 10 km as active rest in the Spring Marathon training plan. But pleasant weather conditions (better than what the weather app indicated), fresh (to the extent possible amongst continuous snow fall) corduroy for skaters and crisp tracks for striders, and snow flakes that seemed to dance their way around changed my plan from a quick lone confessional to a full on pre-Christmas like service. I skied couple segments more than once at the end to get past the 30 km mark. 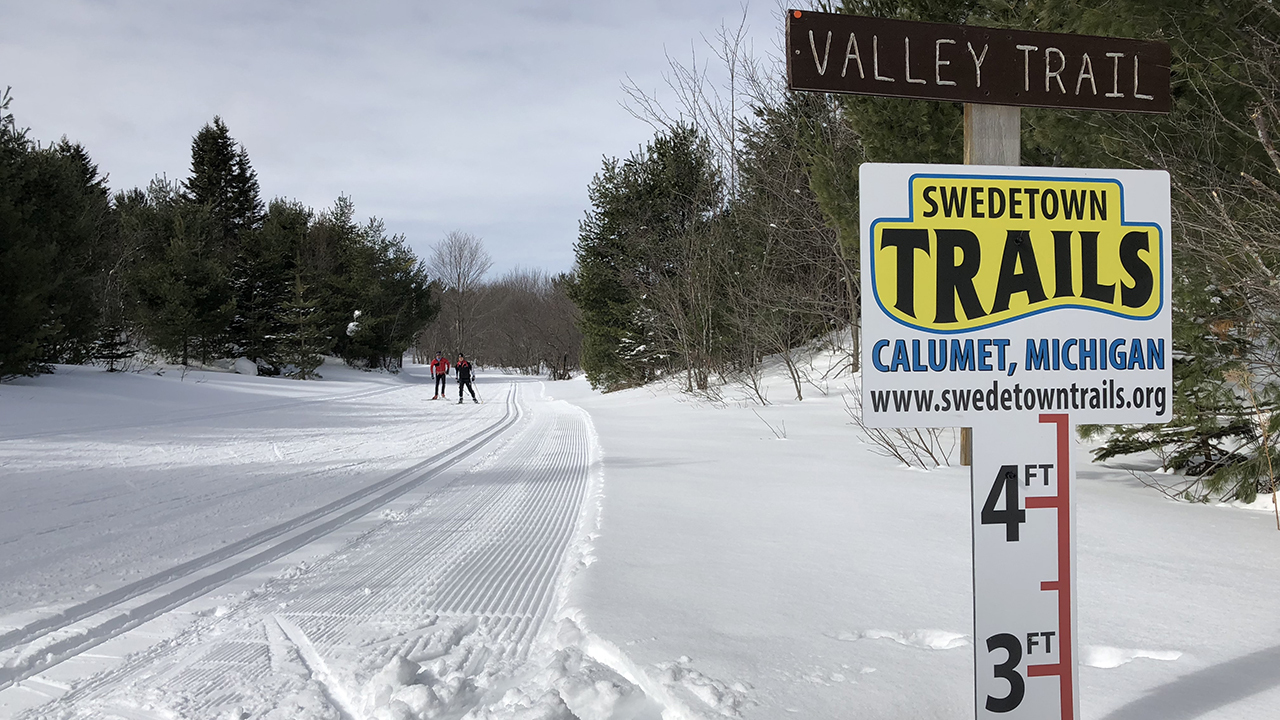 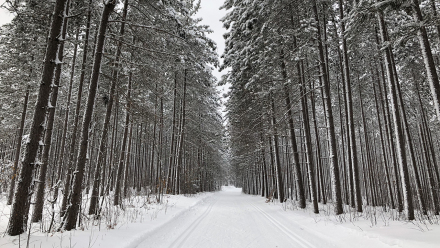 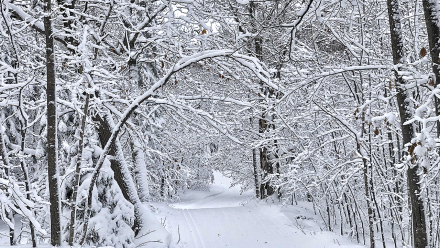 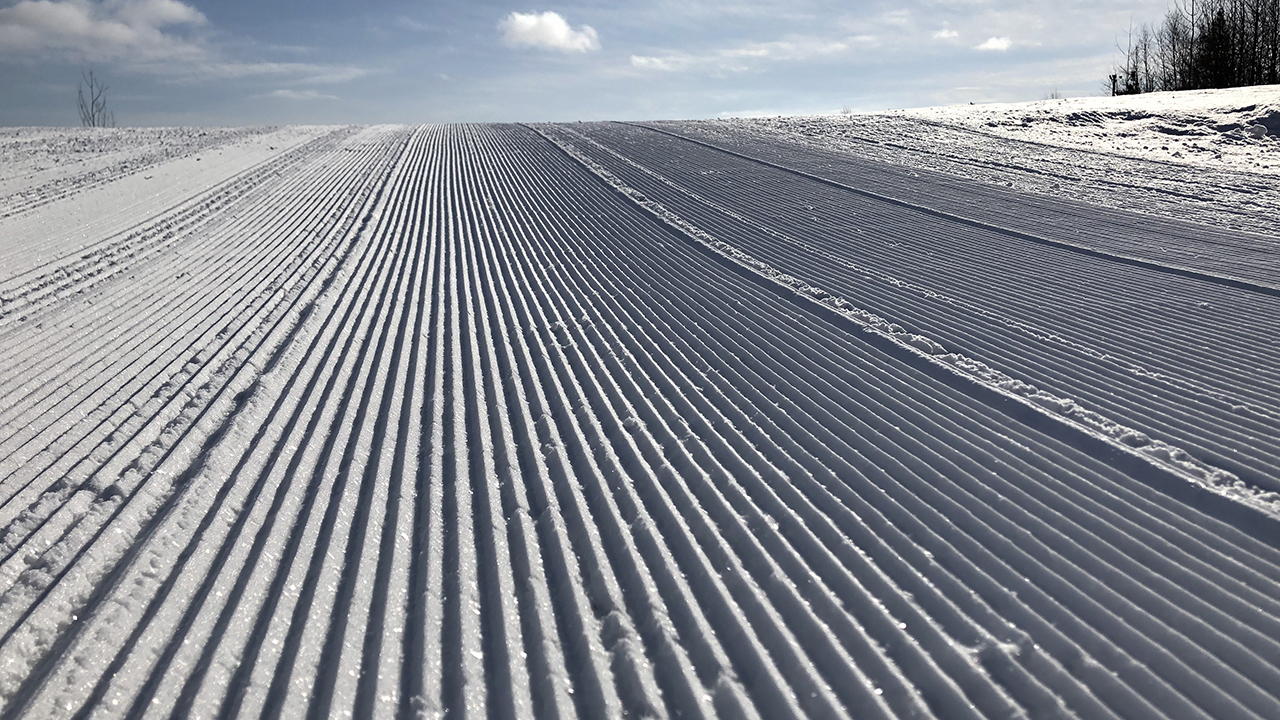 Today was the first day of working from home to keep up with social distancing and doing my part to flatten the curve. Studying the trail system map from the Graph Theory perspective (more info here) – treating every intersection as a vertex and the trail between two vertices as an edge, it was clear that I couldn’t ski the entirety of Churning Rapids Trail System without passing through some trails more than once. The snow was very sticky for the most part and it was lumping up frequently resulting in jerking motion. I was under the impression that I hadn’t properly cleaned the skins of my skis … until I meat Dave and Mark around 6.7 km mark. They too had been struggling with same issue, and I needed double-poling to get down the Thoroughfare Trail. Though I felt like I skied the entirety of this system, taking conditions into account, this felt more like a one for the sake of records attempt. I’ld love to enjoy this system when the conditions are favorable. 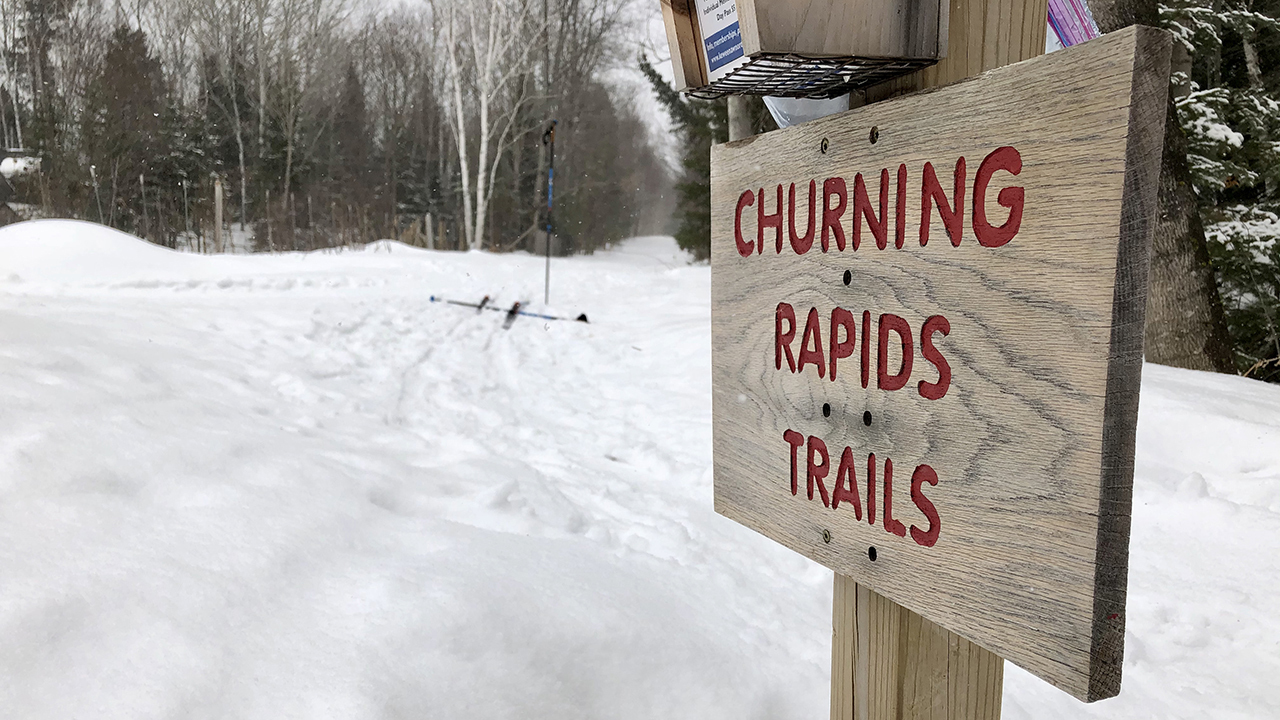 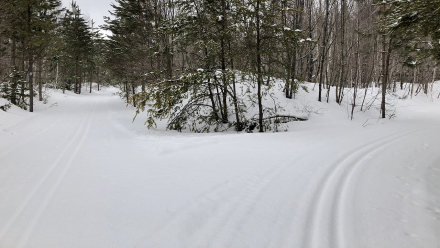 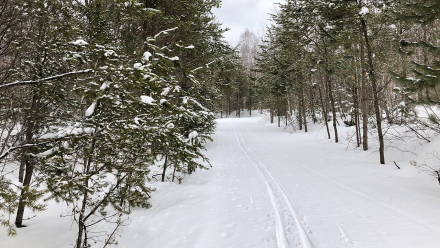 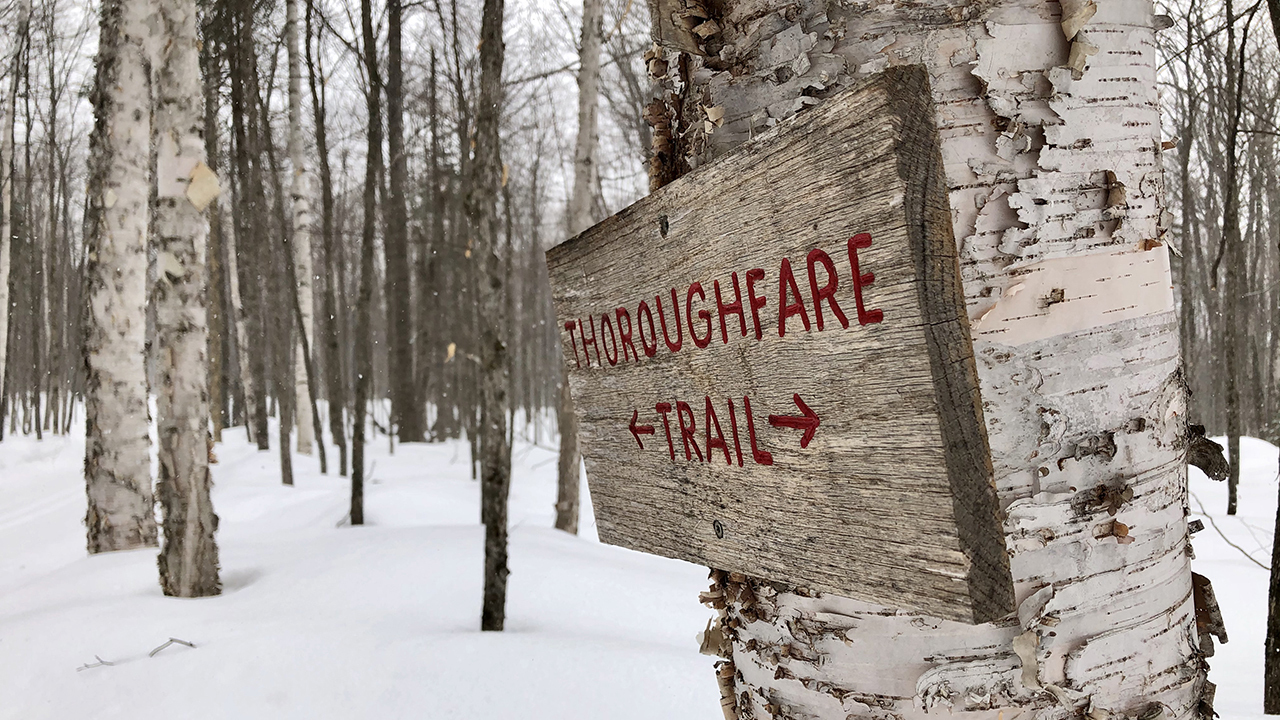 This particular outing had been in the works for quite some time: start at the main trailhead in the upper system and go through every trail/loop including Tolkien and lower systems until back at the trailhead. Think of NASCAR but only making right turns. A couple years ago, I didn’t have the skill or the stamina to ski every loop/trail. Last year, I had the skill and stamina but a part of the Ridge Loop in the lower system was blocked off (an aftermath of 2018 Father’s Day Flood). Today was the first time this winter, not counting the two occasions I got to be a part of the forerunning team for 2020 Pre-National and National Championships, that I skied any of the hillier/challenging trails or lower/Tolkien system. Skiing through the Royalwood Loop in the lower system has always been a fond memory – that’s where my dear friends – Kaitlyn, Kris and Greg – got my cross country skiing journey started back in 2014 January! I did carry a bit of Mathematics problem with me on this outing: skiing an Eulerian Circuit (more info: genesis of Graph Theory). Treating every intersection as a vertex and every trail as an edge, the route would have been one if not for the single entry/exit trail into/out of Tolkien system. 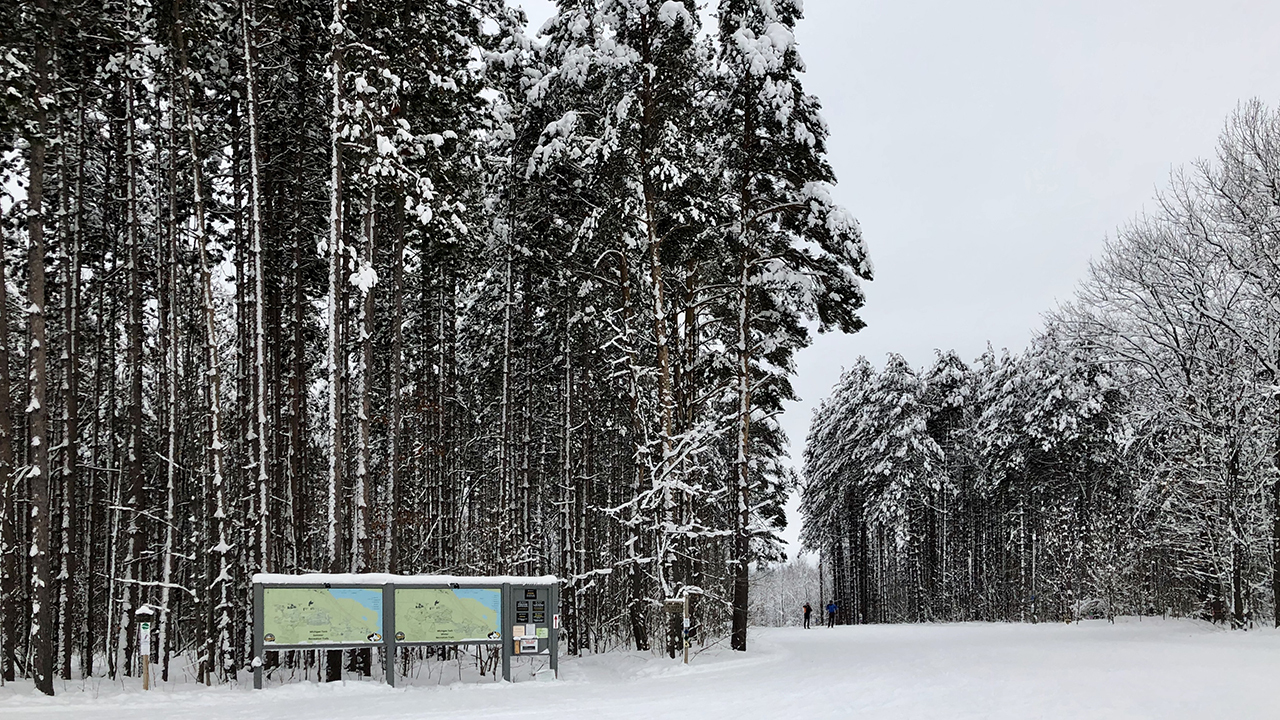 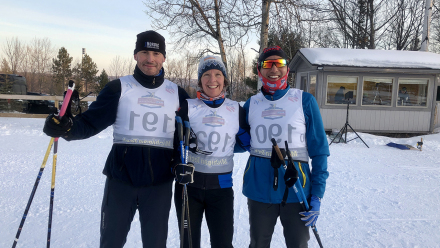 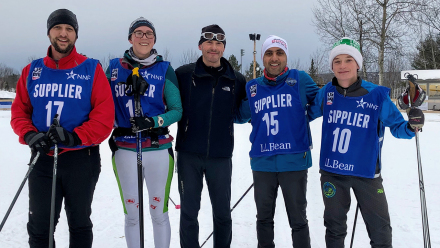