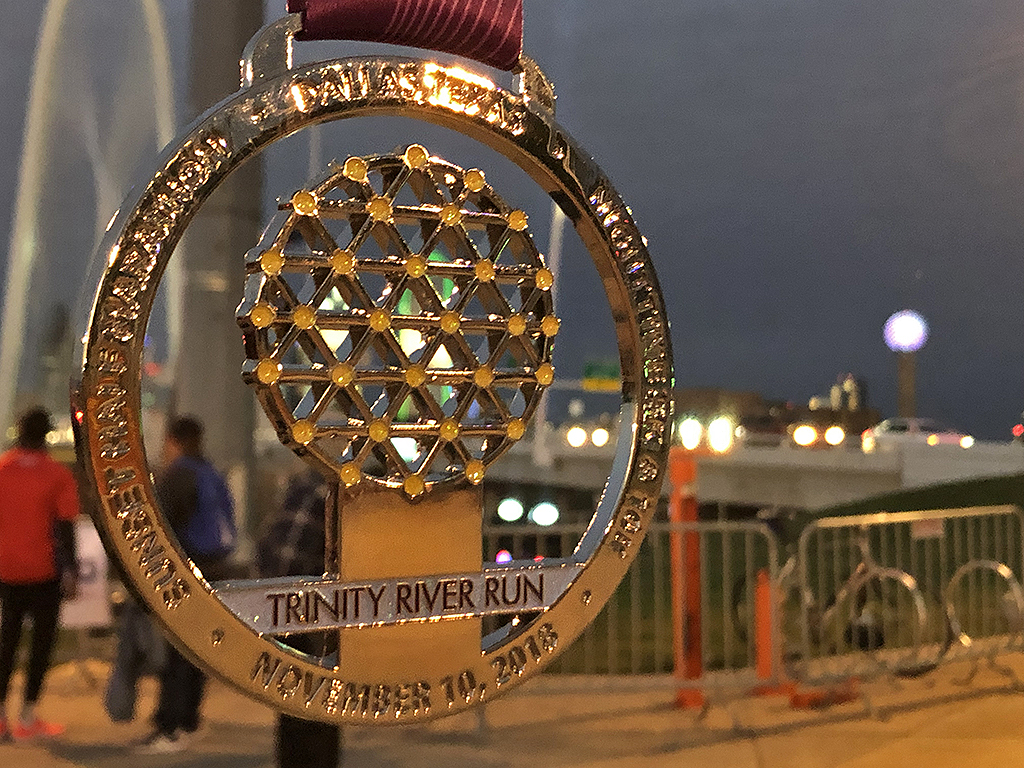 Ever since SC14 in New Orleans, when I accidentally learned that many nerdy/geeky members of my Supercomputing (SC) / High-Performance Computing (HPC) family are avid runners/athletes, it has become a practice to look for and participate in organized athletic events in conference locations. It adds a bit more spice to and with an opportunity run with and learn from some of them, helps me extract more value from what would otherwise be a purely academic trip punctuated with delicious pit stops. Supercomputing (SC18) in Dallas, TX, was no different. As the conference date drew closer, I started searching for Dallas running races in November and found a flat-coursed event – Trinity River Run Half Marathon – outside of the conference schedule. After some trepidation (it wasn’t an inexpensive endeavor) and doing some running mathematics (training plan was calling for 16 LSD miles), I bit the bullet and signed up for the half marathon.

Though I drove to 9 hours to avoid airline delays, mechanical issues and de-icing caused nearly 90-minute delay in Milwaukee, WI. That led to a missed connection in Nashville, TN. Re-revised plan brought me to Dallas, TX, by 1 pm (instead of 10 am). Not yet knowing at that time that my luggage would take another 9 hours to arrive, I did smile and pump my fist when I saw the self-fulfilling prophecy-like billboard. Though I had the necessary attire to get through the Friday’s work meetings, I didn’t get to run around to shake off plane legs. Given all that, it was almost a mystery that I even got to participate in this event. 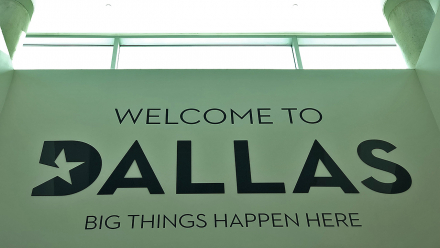 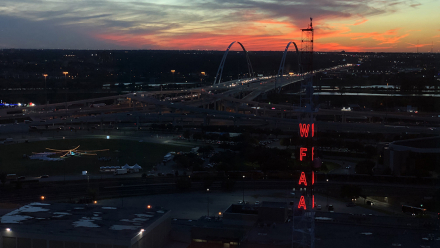 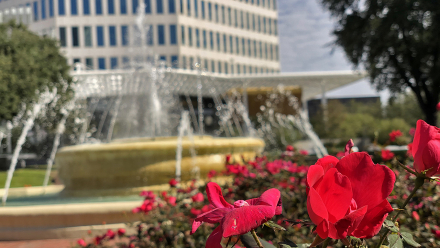 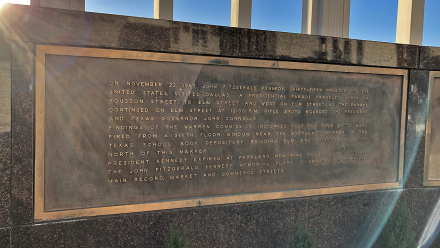 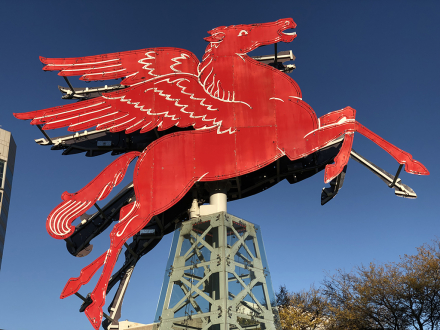 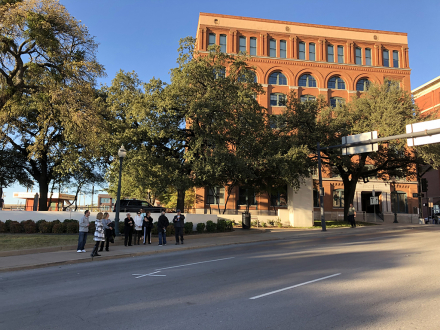 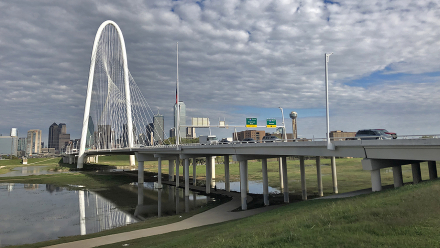 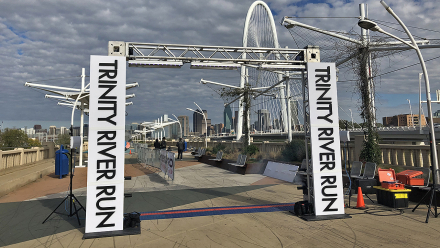 A later-in-the-day start (4 pm) to the race gave plenty time to complete day’s work and touristing a little before getting ready for the event. Given the price tag associated with this event, the organizational skills of the event organizers left a lot to be desired: they changed the packet pick-up information on the day of the event, there wasn’t gear check (or it required a VIP pass with a $40 price tag), mile markers were incorrectly placed, just to name a few. 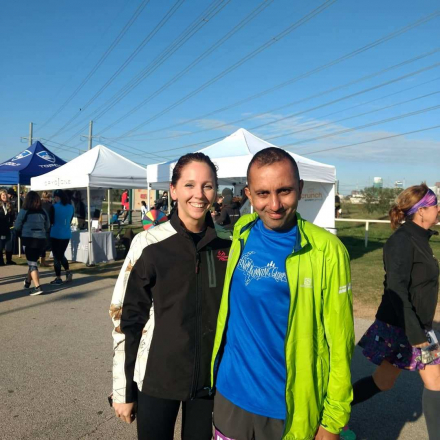 Through a series of fortunate events, I found that an ole friend from Michigan Tech – Nicholle – would be running the same half marathon too. She had an angelic voice and sang the Star Spangled Banner at many a Husky events and festivities during her time as a student. I wouldn’t be surprised at all when she takes her vocal talents to the big league – like The NBA Finals, The Super Bowl, The MLB World Series and such – in the near future! It was great to catch up with her after quite many years, and to meet her husband (John) and daughter (Morgen). John turned out to be my VIP and kept my bag with him while we ran, and Morgen volunteered her time in handing out finisher medals!

The event started amidst some chaos and on a narrow bridge but the course widened after about a mile. I decided to just focus on uneven breathing (to prevent side stitches; thanks, Christine!) and camber of the road (to prevent foot pain; thanks, Lloyd!). The course, though glued to the asphalt, weaved through a variety of neighborhood and some scenic sections .. with camber of the bridges providing the hills. 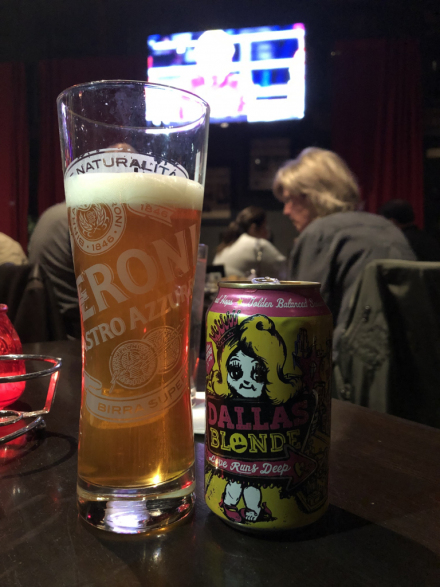 I started with with the 2:20 pace group and by end of mile #1, I was a few ticks below the 9:00 min/mile pace. With each passing mile, I had slowly worked my way to keeping the 1:45 pace group within reach around the halfway mark (0:51:52). A good portion of this first half of the course was one half of the road (to accommodate two-way runners) and the other half open to traffic. So, it wasn’t necessarily easy (or at least, I didn’t have the practice) to pass fellow runners with ease.

Second half was a little windy and I felt it during ascents on couple bridges. Fortunately, I was able to maintain the desired pace. Running with or near the lead pack and running through the desolate neighborhoods, albeit scary at times, made me feel like many of the elite athletes I worship – the loneliness of the lead pack is something I can get used to. I made a good strong push over the last 2 miles and crossed the finish line at 1:41:24 (65/918 overall, 54/367 in gender and 12/62 in AG). With that, I improved my PR for Half Marathon by 98 seconds. The record finally left the Golden State after a 3-year residency and now calls the Lone Star State its new home.

Post-race festivities involved two parts: one in the vicinity of the finish line with John and Morgen, and second with one of Her Majesty The Queen‘s finest knights, Alan Real. We got a celebratory beer and meal and caught up on proceedings on either side of the pond before the conference schedule pulled us away in many directions. I hope SC18 goes as well as I have planned for it, and I hope I can still make time – amidst what appears to be a pretty hectic schedule – to run the streets (and maybe even trails) of Dallas, TX.

The conference did go well and better than expected in many ways than one. I also got nearly stick with the training plan towards 2019 Great Bear Chase throughout the week, run at least a couple times with dear friend Ben Rogers and explored the famed Katy Trail in its entirety … before returning home via uneventful travel segments.