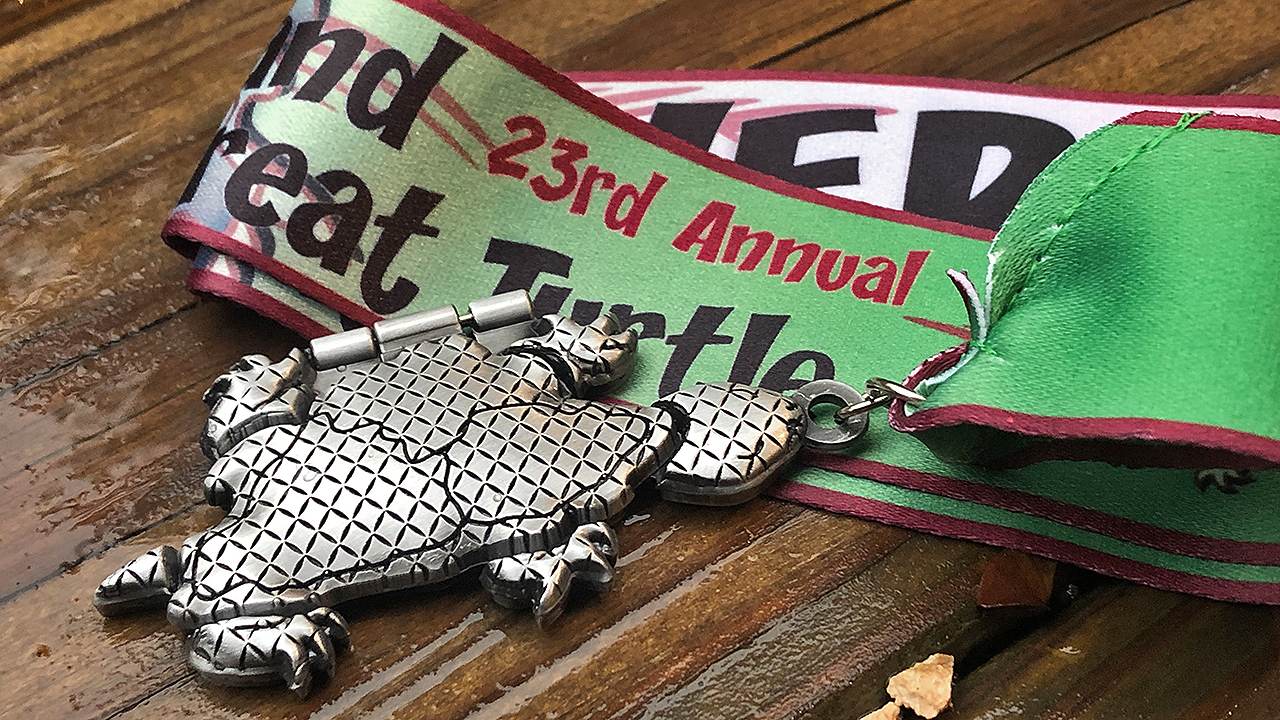 Great Turtle Trail Run Half Marathon was one of those events that got on my bucket list during the early formative years of my running … like 5 or so years ago. Around those days, I had wanted to do every half marathon within 6-8 hours of Houghton, if not anywhere and everywhere. I let life get in the way and I put this event on the backburner of bucket list items. Then again, the stove in those days had so many backburners that it was too easy to forget what I had on them … and needless to say, I forgot all about it. That is, until a week or so ago when Stephen Eles brought it up in a conversation, explained the course profile and expected low temperature and encouraged me to sign up!

With 2018 Chicago Marathon in the rear view mirror, I felt like my body had recovered enough and was ready to resume long-ish distance run. I am signed up to do the 50 km classic in 2019 Great Bear Chase as the first of the two hard racing days of 2019. To that end, this weekend marks the end of prep week #01 calling for 6 miles at race pace on Saturday and 13 LSD miles on Sunday. Figuring it’d give me a short but good road trip across the Yoop and an opportunity to run in a different setting, I finally bit the bullet and signed up about 4 days ago. Thanks to overhearing a conversation a few days before that, I found a good and economical accommodation in St. Ignace on pretty short notice. To complete the preparations before I left town, I even made the Shepler’s Ferry reservation out to Mackinac Island.

Leaving Houghton earlier in the day on Friday left me sufficient time to make few pit stops along the way – some for food, some for restocking water and some to enjoy the sheer grandeur of Lake Superior. Amidst rain and all, I made it safely to St. Ignace on Friday night, and the economical accommodation was better than advertised. A quick bite to eat from a neighborhood family-owned diner and I called it a night. 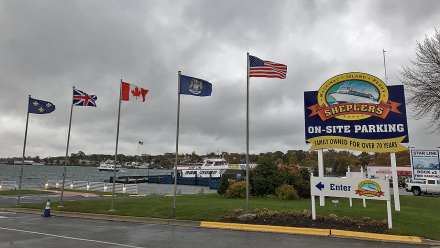 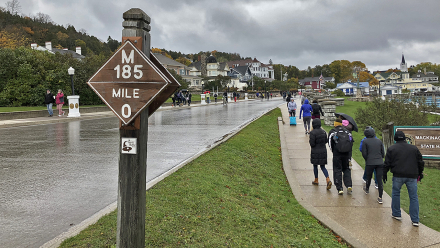 The cloudy, rainy and windy weather ensured I sensibly left my PR goals on mainland (or at least that was my assumption), and only carried the essentials to the island. Multiple layers of clothing did very little to keep me warm while waiting to board the ferry and walking about a mile or so on the island to the expo at Mission Point Resort. I found Stephen, Alaina and an ole friend from Tech at the expo. John should be proud of me for only minimally investing my funds at the expo and getting that one thing we were unable to find in Chicago!

A lovely rendition of the Star Spangled Banner made way for the start of the event. Stephen, from his warm-up run, had recommended that I run as far away from the Lake Huron shoreline (or as close to the middle of the road) as possible . While head/cross winds were unavoidable, following his recommendation helped stay relatively warm by not getting splashed by crashing waves. One thought I had (and I am sure many others did too) was the direction of head/cross winds at the start: it was easy to assume that winds would be on our back propelling us towards the finish line! 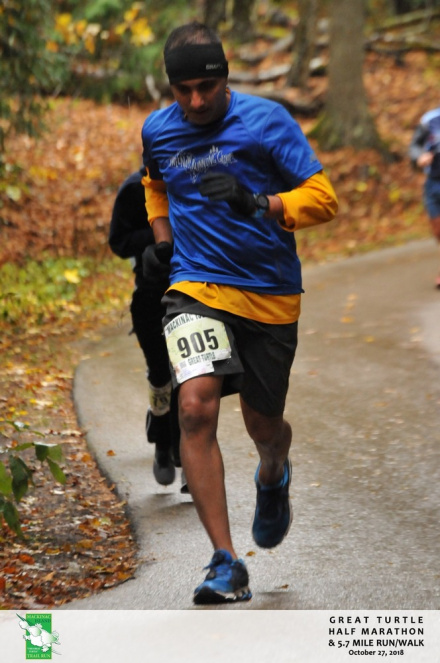 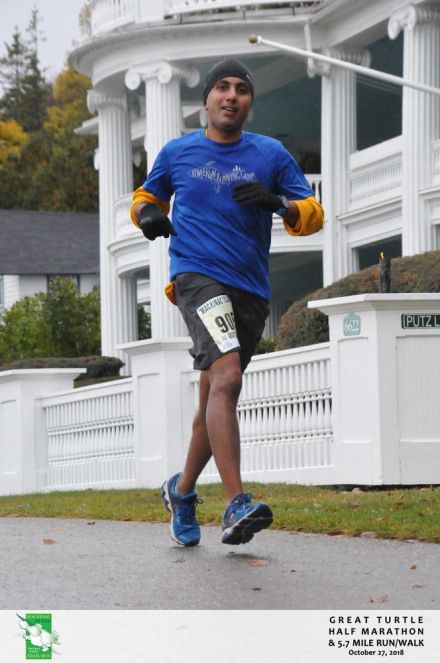 About 2.50 miles into the course, we left the comfort of confident footing on asphalt and turned inwards … into the heart of Mackinac Island on rolling trails. I had been on this island many many moons ago and had stuck to its boundaries/edges on a brake-less bike. But the incidents that followed upon my return to mainland had basically erased any/all good memories I had of my experience on the island. So, in spite of maintaining a decent pace, I got to see parts of the island like I hadn’t before and make newer memories.

The course was more difficult than I had anticipated – rolling hills and slippery segments (I should have paid better attention to the title of the event: Great Turtle Run Trail Half Marathon. A case of Duh, I know) made it quite difficult to settle into any kind of rhythm. Somehow the PR dream had resurfaced, I was still feeling pretty good around the 10.50 mile mark and with the course returning to asphalt over the last 2.50 miles, I figured I’d push the pace. By perceived effort, the pace felt closer to ~7 min/mile and reality, in light of gusting winds that had switched their direction, was quite diferent – 60-90 seconds/mile slower. It was rather demoralizing to continue experiencing headwinds around/after every bend in the course and see the PR dream slip away. I finished in 1:46:02 … good for 51/741 overall, 46/282 in gender and 8/35 in AG.

Stephen, who has never lost this race so far (he finished in 1:17), claimed today’s conditions were by far the worst he has ever seen at this event. This was also Alaina’s first ever half marathon race. She had been making incremental progress by running every single day throughout the 2018 calendar year and she rocked it with 1:54 – finishing first in her U12 age group! I’d like to do this event again some time down the road. While today was beautiful in its own way, I hope it’ll be an autumn-like day – with blue skies, sunshine, gentle winds and spectacular fall foliage – the next time around! 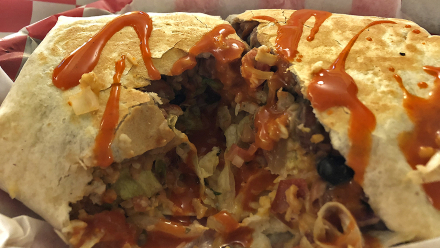 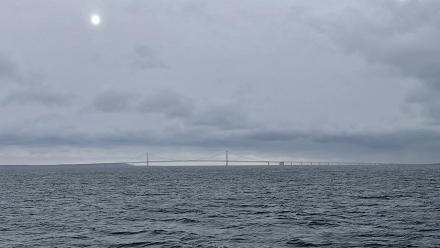 I believe the race day was the last day the island is open for business and they have a lovely tradition of ending it with a Treat Street (or Trick or Treat for kids .. of all ages) on Main Street. Every business establishment participated and it was pretty neat to see many interesting costumes. Most kids would have likely enjoyed it a lot more had it not been for the continued winds and rain. We (Alaina, Stephen and myself) got some food at the Murray Hotel and I acquired some of the famed Mackinac Island Fudge (we were told by someone else earlier that Murray Hotel had the best ones). After wandering through the Main Street some more and making few more friends, I headed back to the cozy confines of my accommodation on mainland. 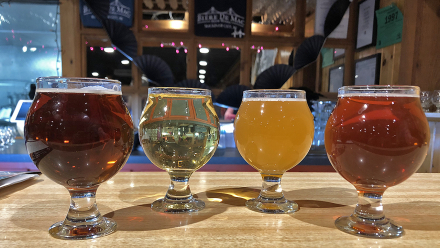 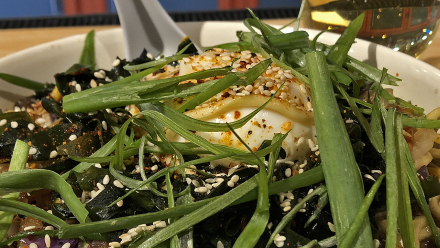 It took quite some time to thaw – a warm shower and a nap certainly helped. Wanting to celebrate the little victories (i.e., checking an item off the race/event bucket list), I Googled for another family-owned diner. Being so close to end of tourist season, most were closed and had winterized their establishments. A second round of search via Untappd helped me find Biere de Mac Brew Works … a quaint little place that caters to (stranded) travelers and tourists alike just south of The Bridge. They had a tasty collection of brews and really good food for a very economical price. I retired early and got plenty of sleep.

Stephen let me join him on his long run (~2 hours) Sunday morning. We started in Mackinaw City and followed the North Central State Trail that goes all the way to Gaylord. It was dark when we started but the trail was flat and safe to run without worrying about rolling our ankles or stubbing our toes. We turned around at 45 minute mark and picked up Alaina. After the run, I got a quick bite to eat in Mackinaw City (it was quite difficult to find anything open around this time of the year). After another warm shower, I checked out and hit the road … basically traversing the same path I had in 2009 on my way home from New Jersey. 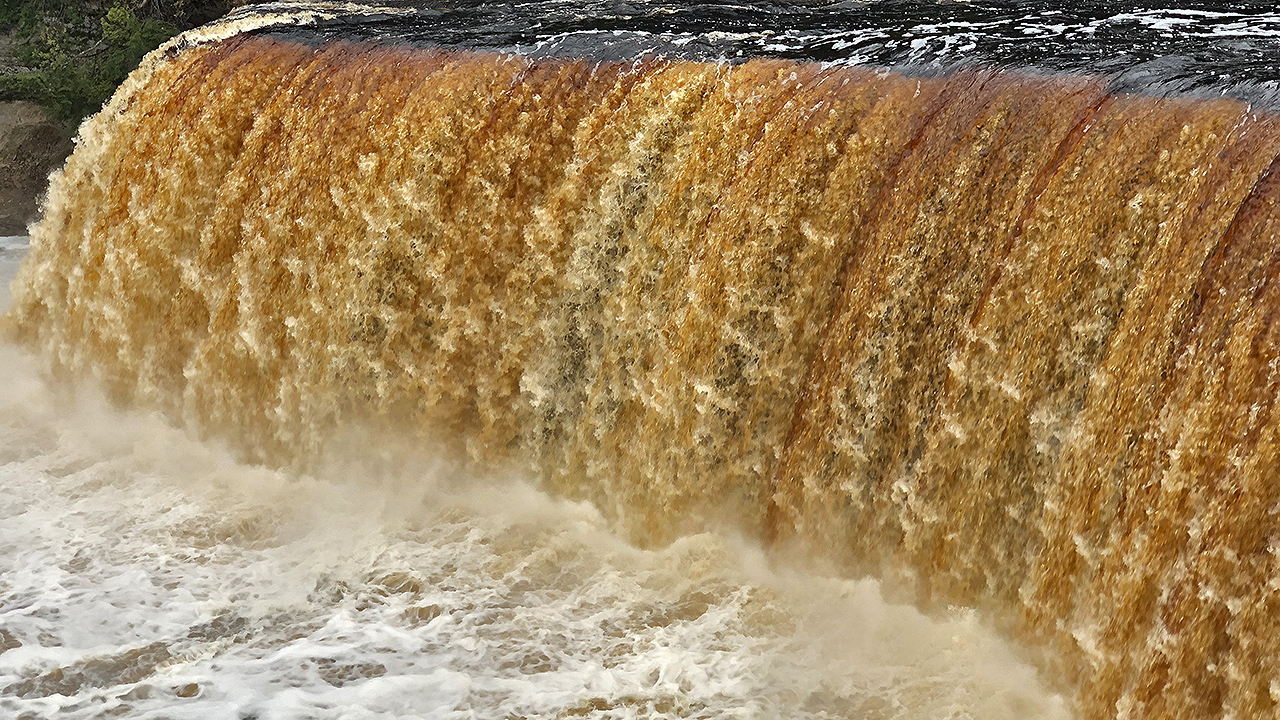 I had signed up for the Whitefish Point Marathon (Bill Sved, the race director, had nudged me again during the Marquette Marathon expo a month or so ago) to hold myself accountable to consistent running throughout 2018-19 winter. Plus, the Whitefish Point Marathon is exactly 18 weeks before the 2019 Chicago Marathon (I am not in yet, but I think I will). I hope to use the event Whitefish Point check my baseline running fitness before beginning the 18-week training for the one in Chicago. Even though I don’t plan on racing Whitefish Point, in line with my normal preparations (some call it over-preparation and others call it OCD), I needed to check the course ahead of time. This detour also took me through the famed Tahquamenon Falls and stop at the Tahquamenon Falls Brewery before they too closed the for the season.

Rest of the drive home was safe and uneventful. It’s about time to start preparing and packing for the SC18 conference in Dallas, TX. Hopefully, the busy and packed schedule of events will still let me explore the city on the run and keep up with the training plan for 2019 Great Bear Chase.

the opportunities, organizers, sponsors, volunteers, timing folks, law enforcement/border patrol/immigration officials, photographers, fellow participants, spectators, technologists with their creative electronic gadgets and tools, and my good friends in and outside of my community for the often unexpected, undeserved, unrewarded acts of constant encouragement, and offerings of constructive criticism, tested tips and tricks to improve myself as an athlete.