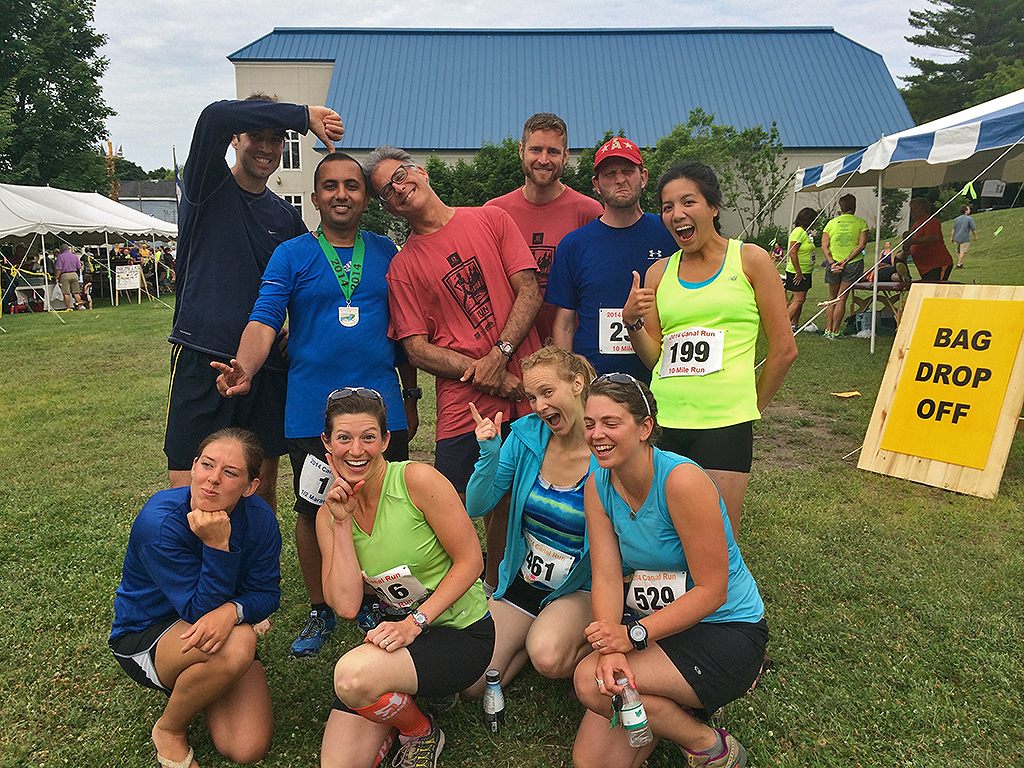 Hancock Canal Run marks the completion of a full year since I took to running half marathon distance, and the first of its kind — half marathon at the same location — that I have participated more than once. It was quite the experience last year. Given the self-imposed goal to run ten half marathons in 2014, this year’s edition — #5 in 2014 — would serve as a good checkpoint for more than one reason: overall improvement in this distance class since last year; improvement in this distance class in 2014; and a guesstimate of available room to improve with five more half marathons before the 2014 season ends.

The good fortune of knowing the race director and her awesome team of organizers helped a great deal in retaining my #1 bib. I understand it’s just a bib number, and what really matters is the time I take to finish the race, but somehow the immature child in me takes a lot of pride in being the first one to register for this race — and I am very very grateful to the organizers.

The last weekend’s Run The Keweenaw: A Festival of Trails was a success: it helped my body and mind be ready to run multiple times a day with no opportunity to sleep in my own bed. With much of the course being (rolling) hills along the scenic trails, it prepared the legs quite well too. With that experience in the bank, running on paved roads while sleeping in my own bed the night before wasn’t expected to be much of an issue.

Overall mindset was on the cheery side through Monday pre-noon but an itchy throat showed its ugly head soon afterwards. Assuming a run would cure this budding sickness while clearing the lactic acid build up in the legs, I went for what was to be a short, easy paced ~3 mile run. It was easy paced but wasn’t short. For one of the only times in as long as I can remember, it felt so good that I felt like I could keep going for quite a while — 3 miler turned into an effortless ~8 miler.

Unfortunately enough, I woke up on Tuesday with noticeable cough, running nose, burning eyes and body ache accompanying the aforementioned itchy throat that kept me mostly off work and on my bed through Friday evening. Option to be at work for absolutely necessary events (thanks to my supervisors and colleagues), suggested dosage of DayQuil and NyQuil Wednesday through Friday, and Advil Cold & Sinus on Thursday and Friday (thanks to Christine and Shannon for the recommendation) ensured that most of these symptoms were gone by Friday 7 pm.

The effect of banked miles run with the Keweenaw Running Group along the Tech Trails, and a strict adherence to Rob Larson workout routine — though I was too sick to run with the former on Wednesday, and felt good enough for only one of the latter on Thursday — was quite evident in the Friday night run. It was planned to be a short, easy paced two mile run. It was short but certainly not easy paced — I didn’t feel like I was running hard but my GPS watch indicated a 9:30 min/mile pace after mile one; in spite of making a conscious attempt to slow down, and not feeling that I was running any harder, the same GPS watch indicated a 8:35 min/mile pace after mile two — giving me plenty of confidence as I called it a night.

Taking into account all that had happened in the week leading up to this event, I woke feeling much much better on Saturday morning. Couple slices of bread, and half a cup of coffee later, I found myself on the bus — with friendly faces — to the start of the race. The number of registered participants for the half marathon had increased by about 20% from 2013, and expertise and experience spanned a wide spectrum amongst them: some running their very first one, some others trying to maintain and/or improve their previous effort, some running for the pure fun of it, and some running with the national flag (it’s quite hard, akin to pushing a stroller when it comes to movement of arms).

Remembering that I had been able to keep the sub 10:00 min/mile pace for the first three miles during Lake Trout Festival Half Marathon, my hope was to keep that pace for at least the first six miles and then take it further depending on how well I felt. The very Nature of the course, downhill for the first three miles, made it really easy to coast along at sub 10:00 min/mile pace. Overcast weather conditions with a gentle breeze (and not as sunny and hot as predicted) made it possible to continue to push at the same pace for another four miles.

Quite like Run The Keweenaw events, it was, and still is, quite the awkward feeling to be passing fellow runners, and for most of them to not pass me again. It’s not that I hadn’t passed fellow runners before, but everyone I had (and hadn’t) passed would pass me somewhere along the course. The post-race festivities involved, apart from hanging out with friendly faces, being interviewed by TV6 and Fox UP (thanks to Sarah Blakely) for what turned out to be a three-part story with video: Part #1, Part #2, and Part #3.

Attempts to compute the affordable pace per mile for the remaining distance to achieve a desired goal while running which continually reduces the remaining distance turned out to be quite hard. A myriad of failed computations later, I concluded that holding steady under 11:00 min/mile past mile nine would help me finish under 2:13:00, a 10:00 min/mile pace. I am not quite sure how or why I concluded that 2:13:00 would translate to 10:00 min/mile pace, in spite of having 2:11:00 written down on a whiteboard in my apartment.

If not for this major mental mathematical failure, a sub 10:00 min/mile dream would have been a reality two races too soon. And if not for the impromptu water stations from members of the community around 7.50 and 11.50 mile markers, I would have taken much longer to finish this race. While being oh so close to the 10:00 min/mile pace sounds somewhat shamefully painful, I should find ways to be happy with the result: 2:12:51 at about 10:08 min/mile pace — nearly 26 minutes faster than my time here a year ago, and 2+ minutes better than my highest expectation for this event.

It doesn’t seem to have taken nearly as long to get under the 2:15:00 barrier from 2:30:00, and I hope keeping up with the aforementioned exercises and frequent runs will continue to do their magic towards realizing the new dream: a sub 2:00 half marathon. Next event of any distance (RAGNAR Relay: Great River) isn’t due for nearly four more weeks, and of such distance (Marquette Half Marathon) isn’t due for nearly six more weeks. More importantly, I hope that I will use this time effectively to train, won’t let my mind and body get too complacent with the latest result and revert to their old but well known lethargic, and procrastinating framework.