Before I go on and write good things, as usual, I must write about bad things. Like I mentioned in my previous entry, all the excitement I had about Bangalore vanished into thin air (or thick smoke, to be precise) within few minutes into the traffic. These certain bad things and some good things need an entry all by themselves, and my next one is all about such things.

The Journey – To and from Cochin

Honestly, while trying to book my ticket for this trip to Cochin, I had my doubts/apprehensions about Kingfisher Airlines. For one, I had never heard about it; for two, I didn’t know anyone who had flew with it. But all such doubts and/or apprehensions vanished within few minutes of reaching Bangalore Airport. Yours truly hadn’t printed the boarding pass (his parents still live in 3rd Century BC, with the computer at their place acting more like a desk decoration and/or paper-weight) but smartly dressed, young employees of Kingfisher printed them off with a smile on their face, in a matter of seconds and I was on my way into the terminal.

Security Check-In was smooth and when about to get my boarding pass (in a first class counter, for an economy coach seat!), I was told that the poster tube also had to be checked in (this airlines allows only one carry on luggage). Not only that, since poster tube was added to already screened luggage, that thing had to go through screening all over again. With a pretty long queue (like Hanumanthana Baala, colloquially speaking), it would have taken about an hour in the 4-years-ago system. But with the current system and Kingfisher, it took less than a minute. A screening official noticed me walking back, called me over, saw my research poster and stuck a security cleared sticker 🙂 /me walks back to the other counter, only to find boarding pass waiting to be picked. Rest of the Check-In process was as smooth as it could be and the flight started on time. Cabin was very clean (yes, clean clean, if you know me) and food was, OMG, just too good. It was one pleasant surprise after another through out this journey and the flight reached Cochin on time too. 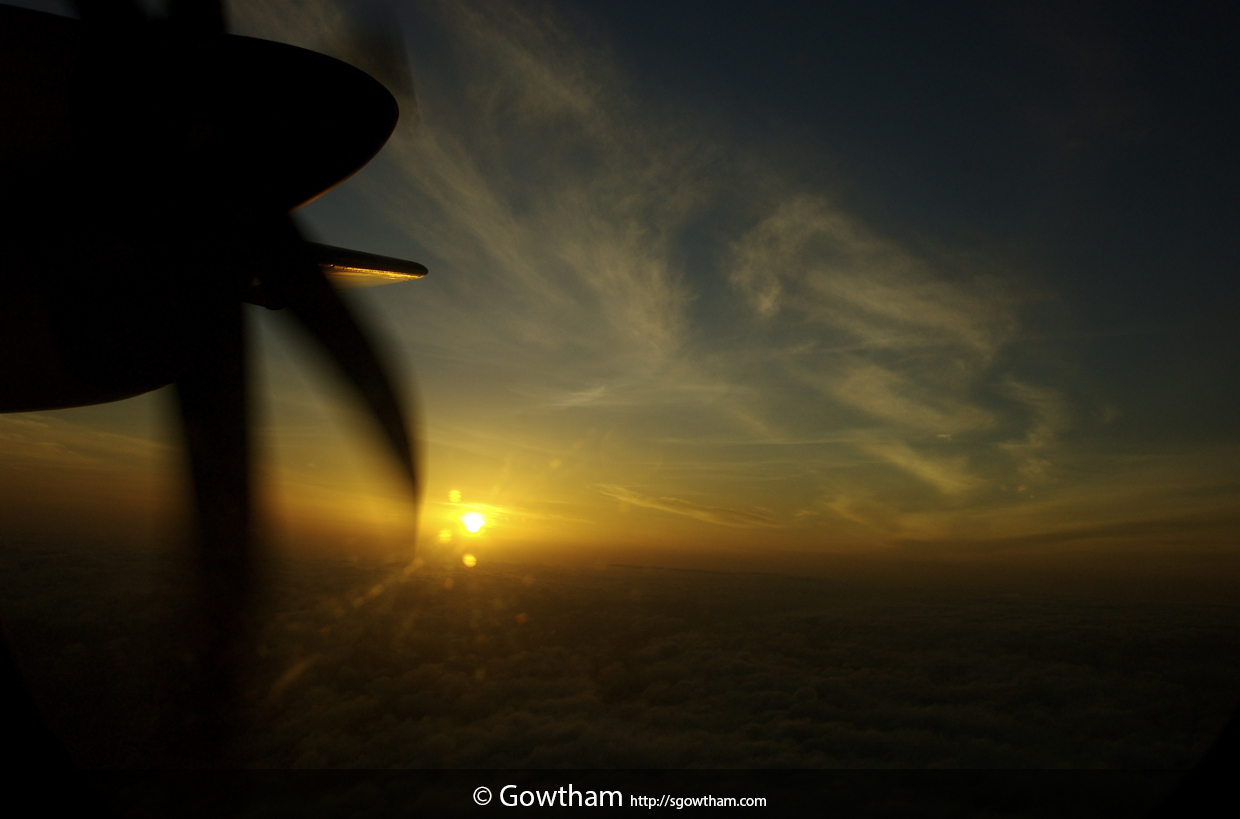 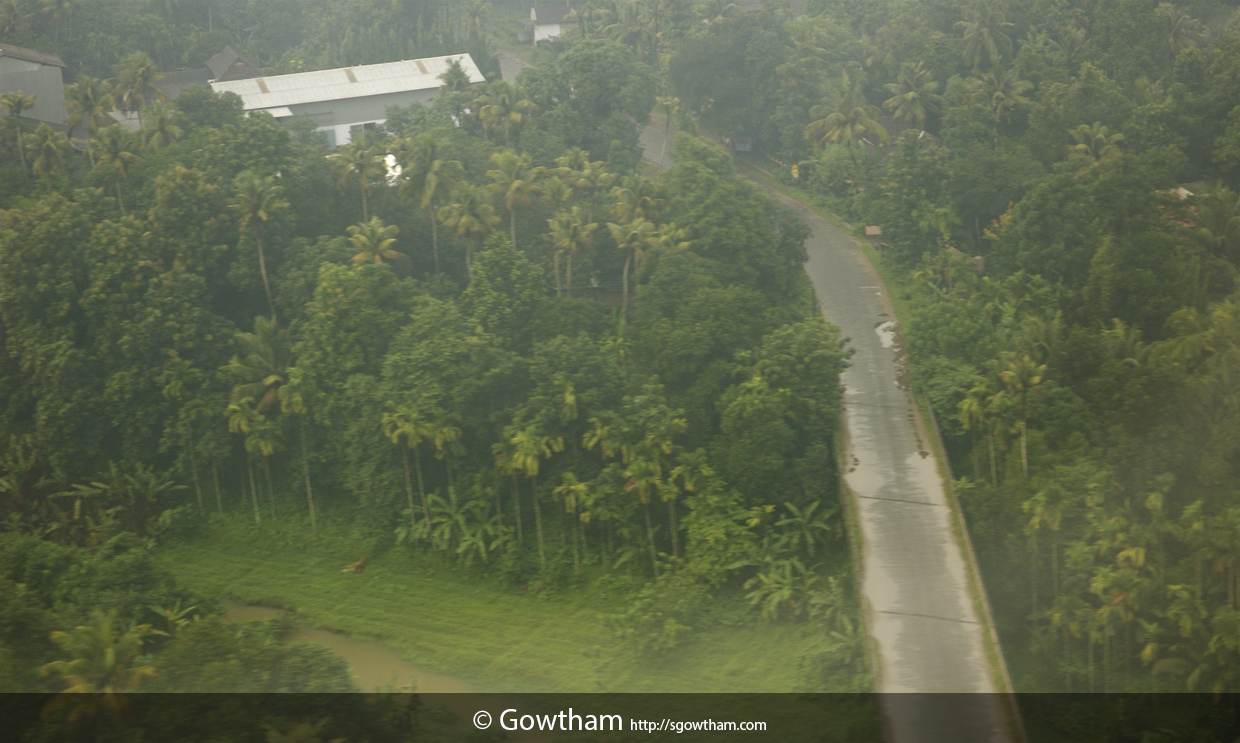 Return journey was pretty smooth and much similar – easy Check-In, great service, good food, on-time departure & arrival, and such. Never heard anyone complain about Kingfisher Airlines (locals as well as invited speakers from other countries) and it’s my personal favourite amongst private carriers in India 🙂 I would recommend this to anyone travelling within India and just can’t wait to see them fly international…

Thanks to some exemplary arrangements (more about this later), people were waiting with sign-boards to pick up and provide transportation to the hotel. In all, we were five passengers – Dr. Asim Ray, Dr. Robert Vajtai, Agnes Vajtai, Dr. John Jaszczak and yours-truly — in the van, and I had to wait until we reached the hotel to realize how far we had travelled (close to 50 km)! As it happened to be around the check out time, I had to wait for a while in the lobby – part of the time in talking to Dr. Jaszczak and rest, shooting pictures just outside. About 45 minutes and some chai later, I was guided to my room and I still hadn’t realized where I was staying. Minutes pass by, I access the internet in a WiFi fashion and 30 minutes later, I get a phone call from the service department, Sir, How was the connectivity and speed of our connection?. It felt kinda weird but same thing repeated 45 minutes later, when I was eating some food. It was only after these incidents that the dumb /me realized it wasn’t any hotel by name Taj, but it was The Taj! Took me a while to recover from that shock and honesly, I haven’t recovered completely from it yet.

Much of my time at this conference was spent outside the lecture hall but I learnt many valuable things – many such tiny little things, which an attendee wouldn’t normally worry about, which do keep the chain (of activities) connected. Barring few minor troublesome incidents, much of it was very smooth. Taj staff did an awesome job, providing us with things — whatever we asked for and however unreasonable it might have sounded at that instant — within a matter of minutes, and that too, with a gentle smile on their face.

About the organization of the symposium, this is the first one to my knowledge, where a very detailed spouse program was chalked out. Usually, they (spouse and kids) end up spending time in the hotel room/lobby and are bored to death pretty soon. But this one was pretty special – spouse/companion program included daily trips to few worth-visiting places, visits to popular shopping areas and the best of all, traditional Kerala massage (yes, a massage). Now, how many workshops/symposia you attend have these things?? This (and many other things) was (were) the brainchild(ren) of Poornima’s planning and something subsequent organizers should (or must?) keep in mind. Some felt that the conference organizers forgot the Indian aspects while arranging things – but hey, such is life — we don’t get everything right in the first attempt and as long as we make sincere attempts to improve, it’s fine 🙂 There were cultural programs too – one organized as part of our symposium (on Sree KrishNa JanmAshTami) and several others organized by Taj as a part of their evening routine. Some snaps from our event are below: 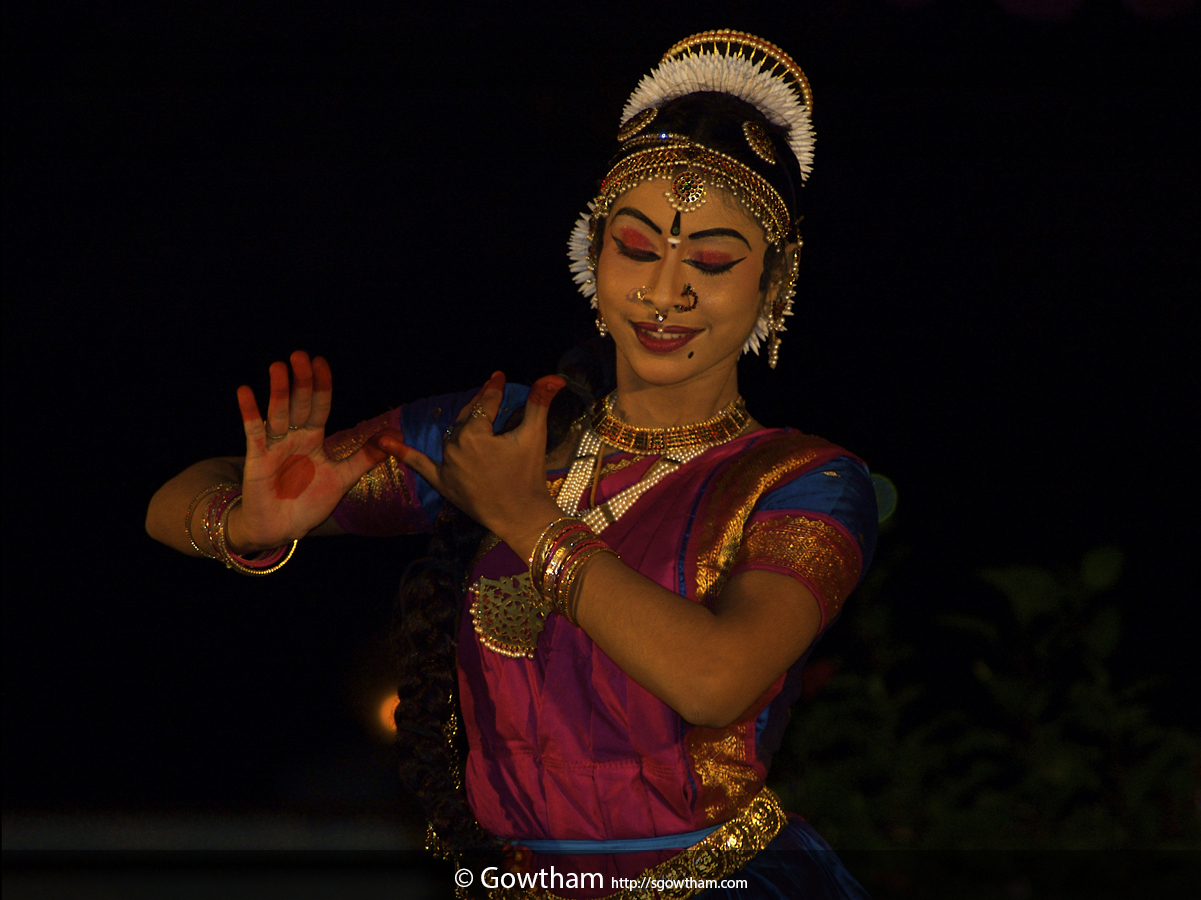 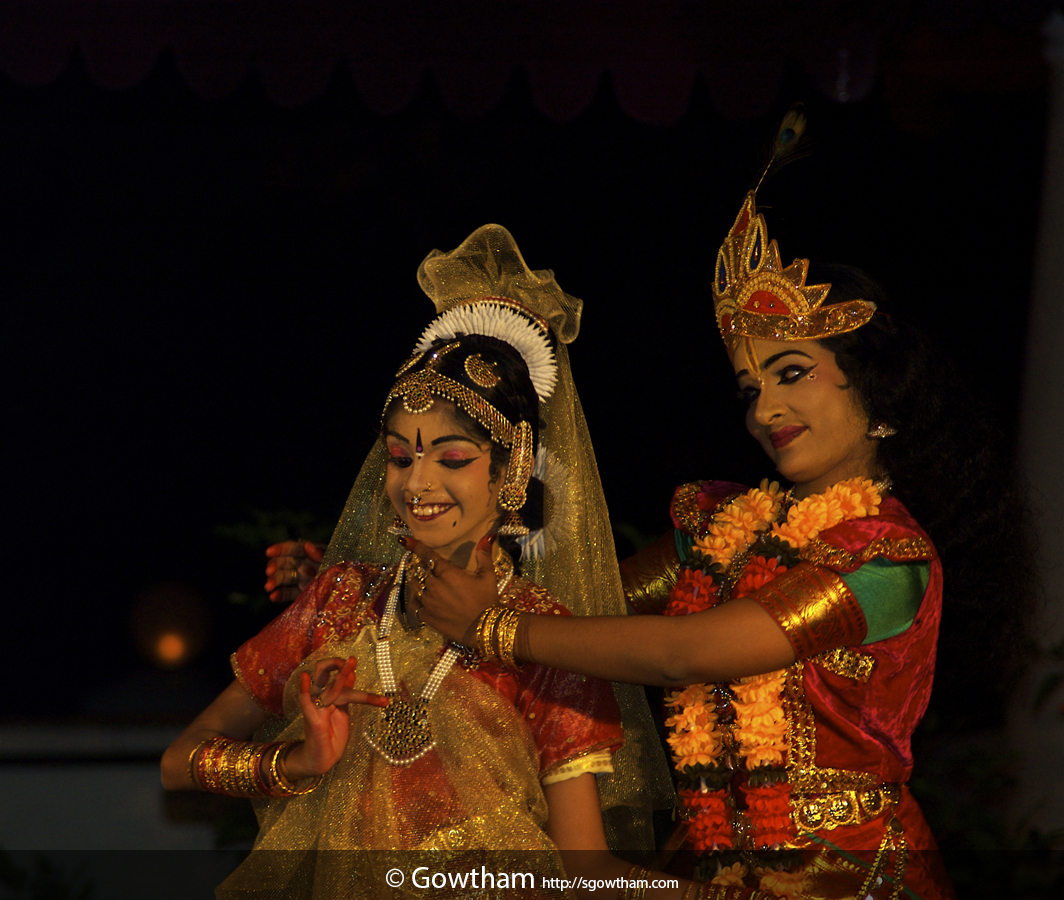 For more information about this type of music and/or dance forms, feel free to contact this, this and/or this person and they should be able to help you out, lot better than /me can do 🙂

To more important things now, food was just great – no one complained about this; I got to see and meet many people that I had only known by name; got to see Cochin in much better detail than last time, was part of boyz-only discussion on the last day (drawing maps of various cities), had couple of boat tours (sunset and backwater), and so on. The latter boat trip, in the backwaters of Kerala, was an eye-opener for me. /me, like few others on the trip were, was under the impression that backwater drive would be through narrow water-passages in a small boat. But it turned out to be more like a Lake Powell type experience – water-passages were huge (at least 6 – 8 times our Portage canal in Michigan’s UP) and the carrier was a house boat (with three full scale rooms, a kitchen, a chef and two who could drive). Needless to mention that I shot lots (and lots) of pictures and received another shock while trying to recover from last one – staying in Taj itself still feels like a dream and add this 4 hour boat ride to that!!

Some of the pictures below were shot on the way to our starting point and rest were taken while on boat. 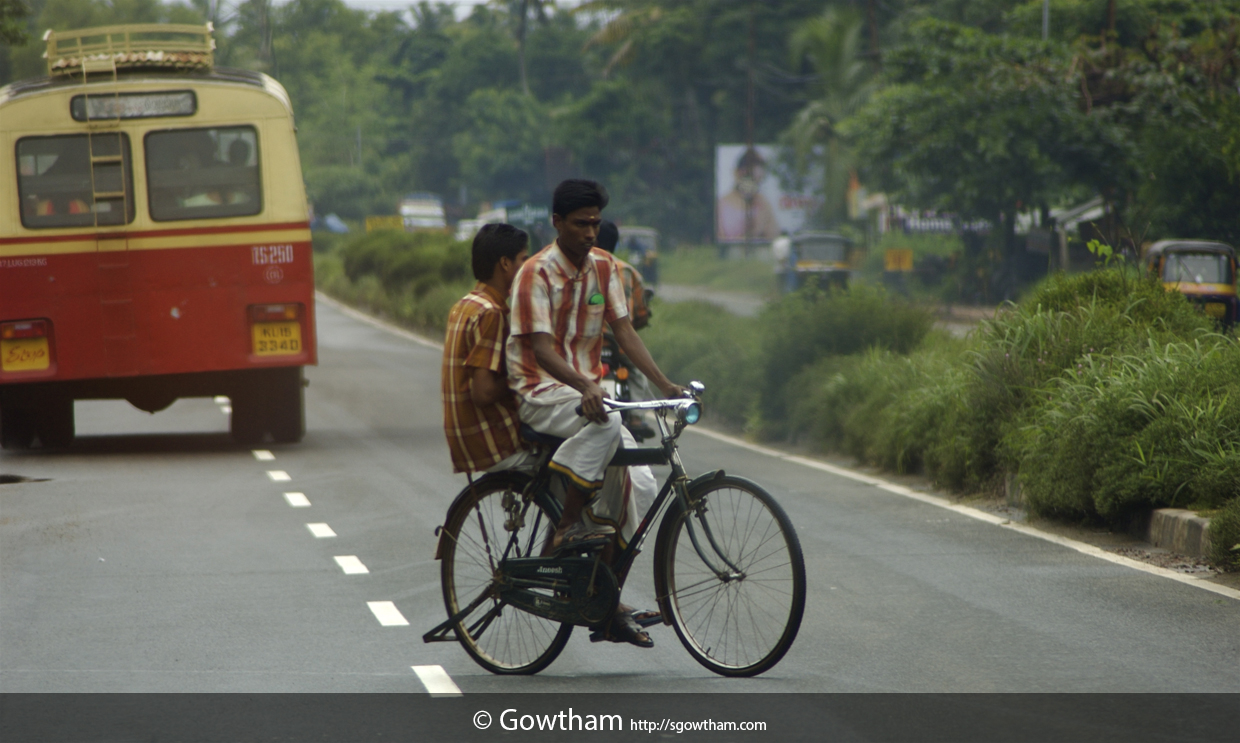 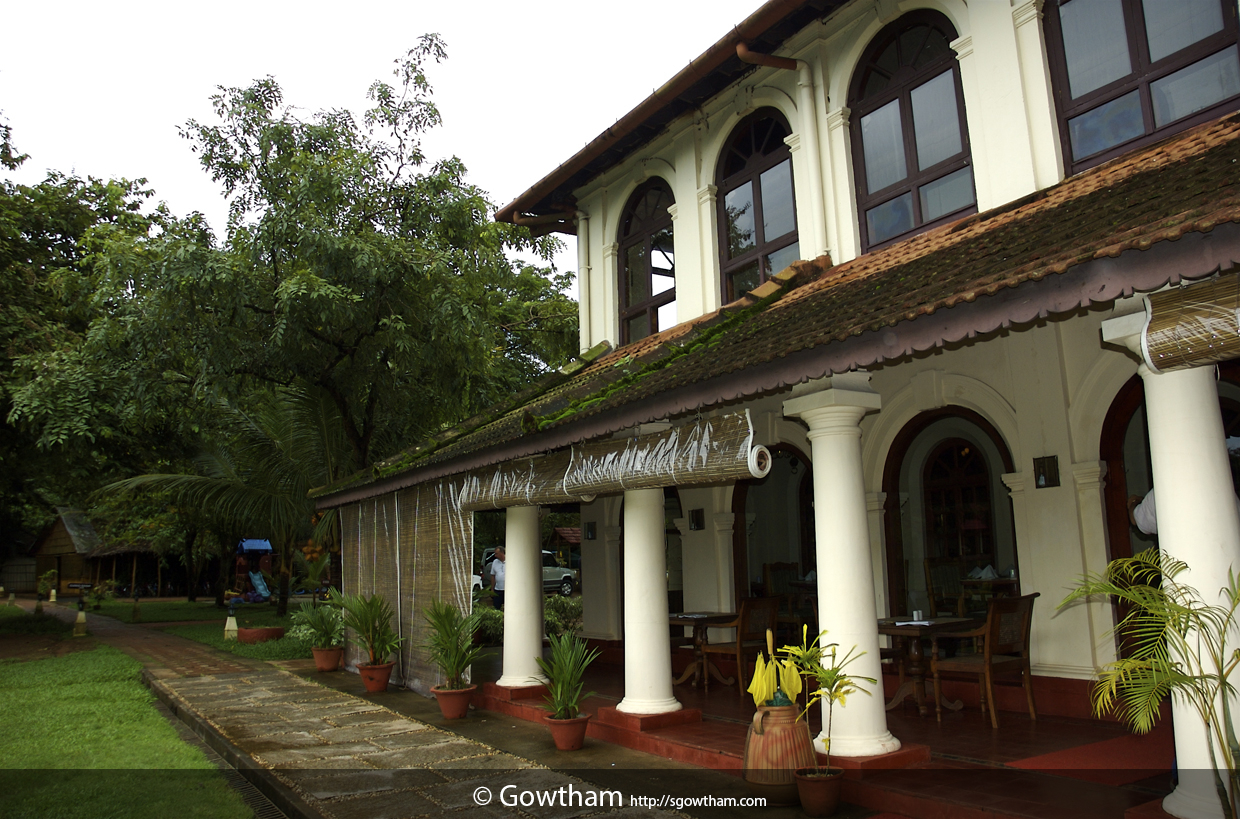 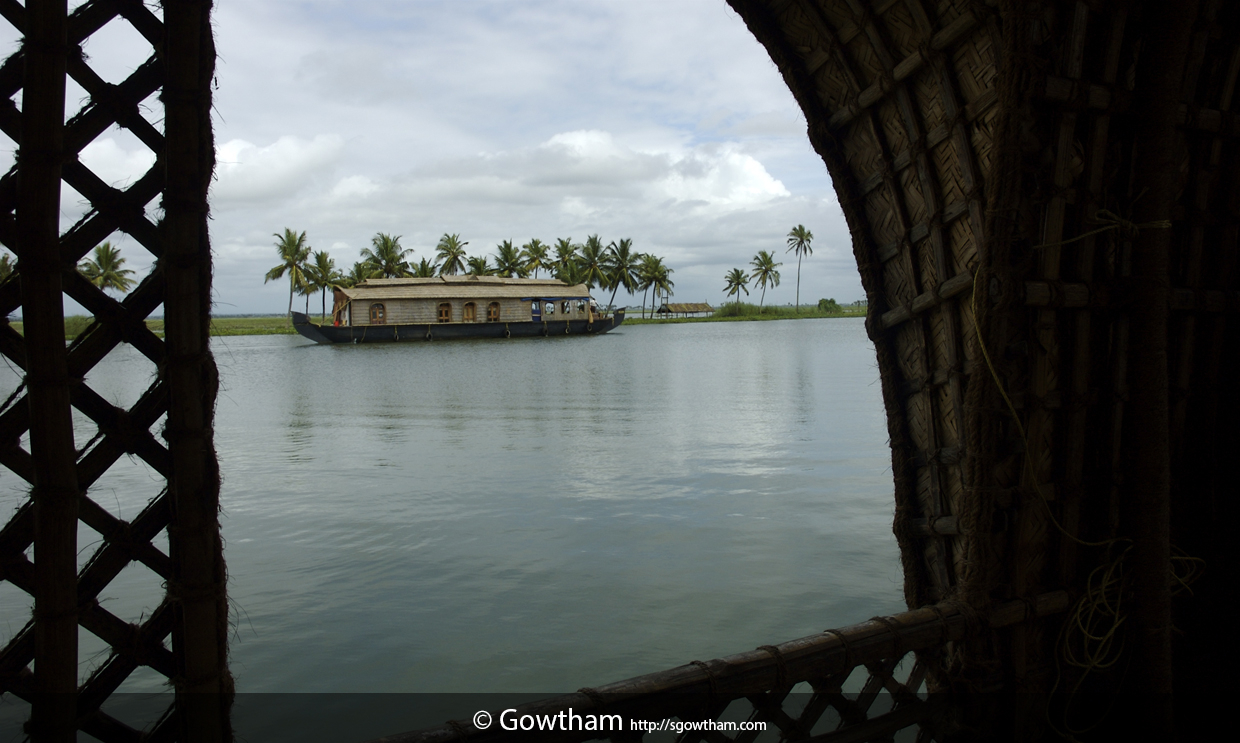 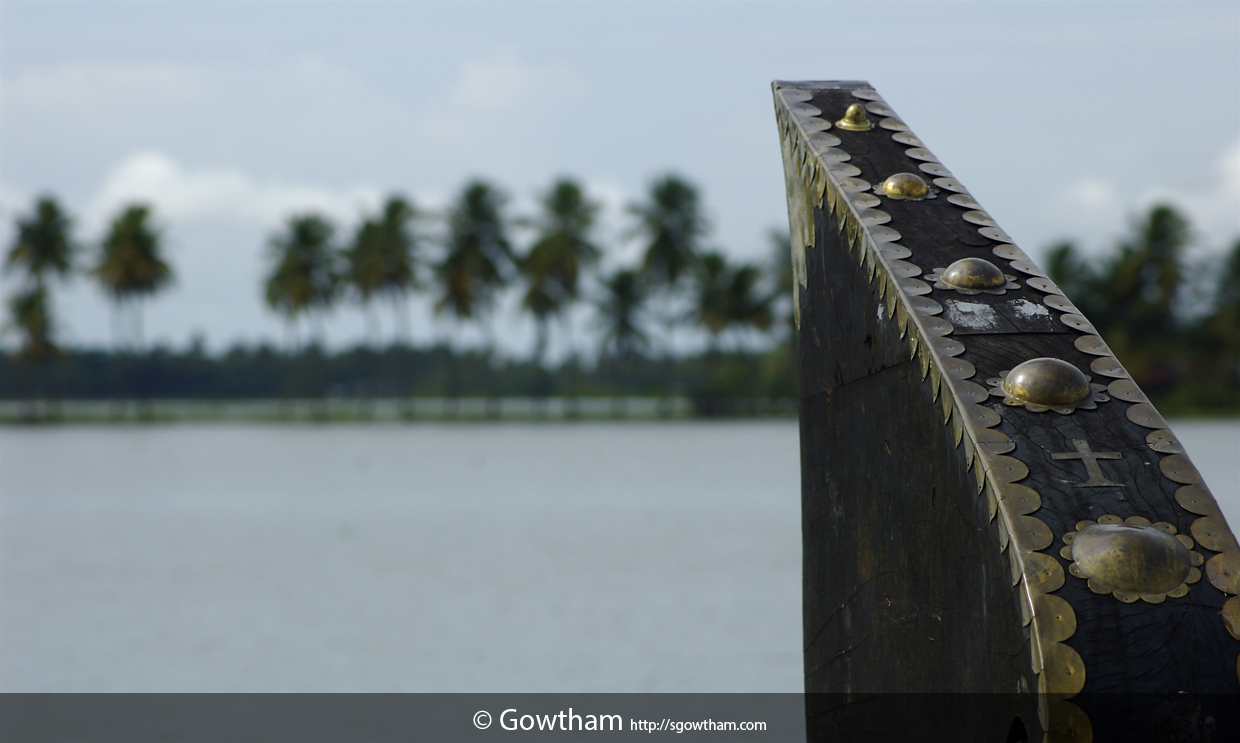 It will be a while before all these sink in and for sure, I am reconvinced that this (Kerala) indeed is God’s Own Land. If you can’t convince yourself of this fact, blame /me and my photography skills – and, just take a trip yourself…