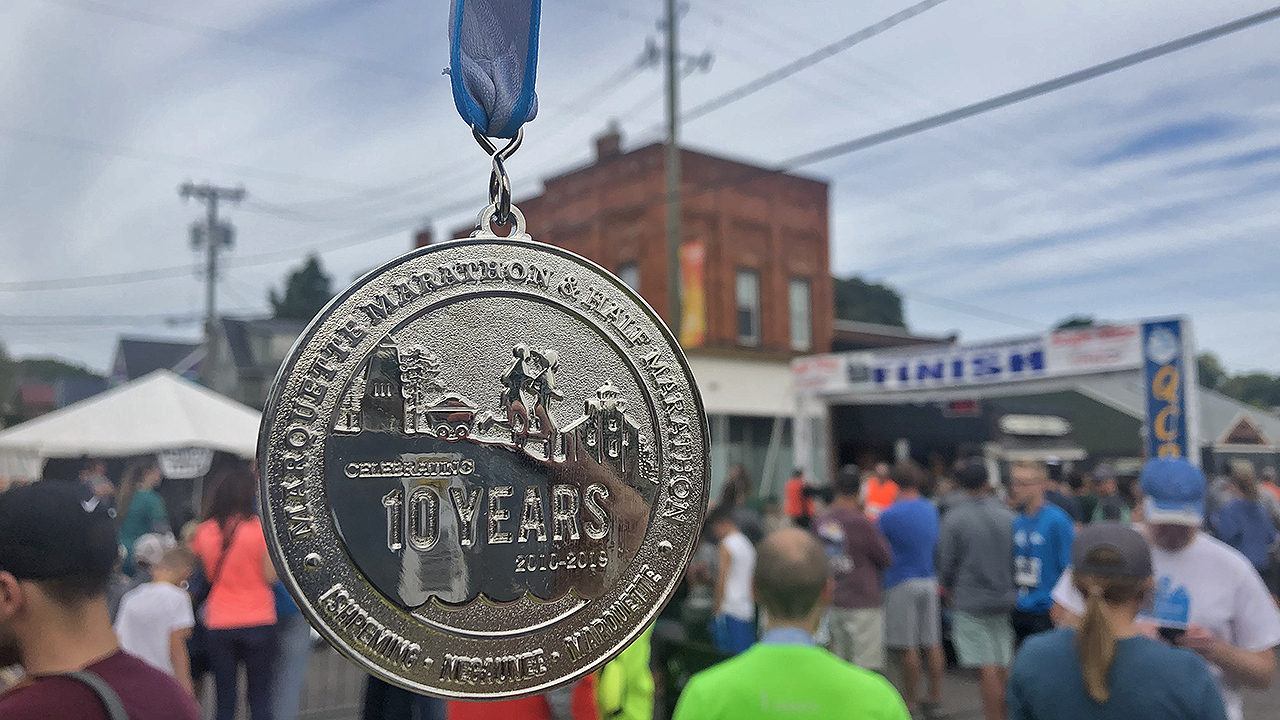 Currently in week #05 of a training cycle towards a Fall marathon, my original plan for this event (like, when I first registered in December 2018) was to run the full distance as a supported long training run. Over the last 2-3 weeks (and even as late as Tuesday of this week), I flirted with the idea of sticking to the full distance at a fairly good pace … assuming the weather angels blessed us all with a day made for racing. As much as I believe in pushing the limits, I believe that I am a stronger believer in the process and its transformational power. Coupled with the advice Stephen Eles offered halfway through week #04, I decided to run just half the distance but almost entirely in an unwieldy zone. Doing so would have the added benefit of having plenty more time to cheer on John Farquhar as he punches his ticket to 2020 Boston and Bill Sved completes his 300th (yes, three hundred) marathon!

According to the training plan, this was supposed to be a regular 12 miles LSD run at the end of week #13 towards Chicago Marathon. But I decided to race a half marathon to get used to the real race atmosphere one more time about 5 weeks before the main event. The goal was to earn a PR (1:43:02 or below). I stayed at the Gracis (Kara, Sam and Walker) along with the Farquhars (Cheryl and John). After dinner at the house, John and I walked up the Third Street segment of the course – to measure the distance and in turn, have a better idea of what it takes for a final push.

I started slow averaging ~8 min/mile for the first 5 miles while accounting for rolling course. I cautiously pushed the pace for the next 5 miles once the course was all downhill while accounting for potential slippery surface and possible quadraceps pain. At about the 10 mile mark, a PR was well within range. But I gave into into the humid and muggy conditions on top of carrying thoughts about something that happened at an aid station shortly after mile 10. The latter most certainly didn’t help my cause … I was shy of the PR by about 4 minutes (57/534 overall, 38/198 in gender and 14/62 in AG).

Shortly after crossing the finish line, it was really cool to see Kara come through punching her ticket to 2019 Boston Marathon with nearly 7.5 minutes to spare! Jan and John won their respective age groups and Angela had a pretty good race too!! It was also disheartening to hear the story of an elderly gentleman that missed out on qualifying for Boston by just one minute. I felt pretty good about the impact of training so far in spite of missing a PR. I realized the need to continue working on letting things go as well as on improving and sustaining cadence over longer durations.

The Fall marathon training plan I am following called for a 17-mile LSD run on this day. Since I’d be racing today’s event, I split the distance into three parts: a 1-2 miles of warm-up, 13-mile race and 2-3 miles of warm-down. Also, I re-arranged the Friday’s 10 easy 10 miles into two parts: a 3-mile easy shakeout on Friday and a 7-mile easy recovery run on Sunday morning. As usual, the 3-mile shakeout run was completed by 9:30 am and having packed the car by mid Friday afternoon, I had ended the day’s proceedings around 10 pm. A full night of sleep meant waking up early and taking to the road by 5 am seemed quite relaxing. An easy 2-ish hour drive, similar to 2019 Paavo Nurmi Half Marathon, got me to Marquette with sufficient time to catch the shuttle to the start. After picking up my race packet at the Michigan Iron Industry Museum and chatting briefly with Angela, Claudio and Lynn, I completed the warm-up routine (similar to what Craig had shown me during 2019 Canal Run Half Marathon) few minutes before the national anthem and start of the race.

The main goal for this event was to learn more about pacing: unlike the 2019 Canal Run and 2019 Paavo Nurmi half marathons (where I had held back in the first half and pushed the effort in the second half), the plan was to gradually push to achieve a comfortably uncomfortable pace by mile #5 and sustain/improve  it through the finish. And as a by-product of following this pacing strategy, I expected to earn a new PR for the half marathon distance (i.e., finish below 1:38:06).

Apriori knowledge of the course (especially the starting area that takes the shape of a funnel) meant that I started near the very front. Unlike the previous two half marathons, I didn’t peel back after the start … mostly because of the narrow trail and additionally because I didn’t want someone to clip my heels in that hurry. Flatter terrain (and some rolling stuff over miles #4 and #5) meant I could average 7:10 min/mile (about 10 seconds/mile faster than what Ray had prescribed) by the end of mile #5. Not making time to study/revise the course and in turn, not knowing where the course transitioned from gravel to pavement (or incorrectly assuming that it did so around mile 4.50) proved a little costly. I spent a little too much mental energy contemplating when to start the next push. Since the course remained about the same at the beginning of mile #6, I decided to risk and started pushing the pace to the neighborhood of 6:45 min/mile – something that I hadn’t tested or experienced before.

Thanks to Sir Isaac Newton’s ever-present gravity, holding that pace through mile #10 mile … something supposed to be uncomfortable … seemed rather easy and conversational. It felt quite surreal to be breezing past the mile markers … and that such a day was here lot sooner than I had expected. Breathing remained under control and cadence was in the vicinity of 175 spm throughout the run. I purposefully held back a little over the relatively flat miles of #11 and #12 … to save some for the final push up the Third Street hill to the finish line.

Furthermore, unlike last year, I did let go aid-station misgivings (e.g., plastic cups that were either difficult to squeeze or just would crack when squeezed losing all water, etc.) and enjoyed the benefits of lighter miles. Post-run activities included re-hydrating, running back down to the bottom of Third Street to accompany John as he finished a  marathon strong in spite of a nagging injury/pain for nearly 10 miles, congratulating Bill on completing his 300th marathon, grabbing one half burrito to re-fuel, getting a quick courtesy massage, meeting newly acquainted friends and making new ones. After joyfully spending rest of the afternoon and evening, I decided to drive back to Houghton … but not before meeting Tim, Jeremy, Carol and Andy … in Ishpeming to train for the upcoming Marji Gesick festivities.

One Reply to “2019: Marquette Half Marathon”