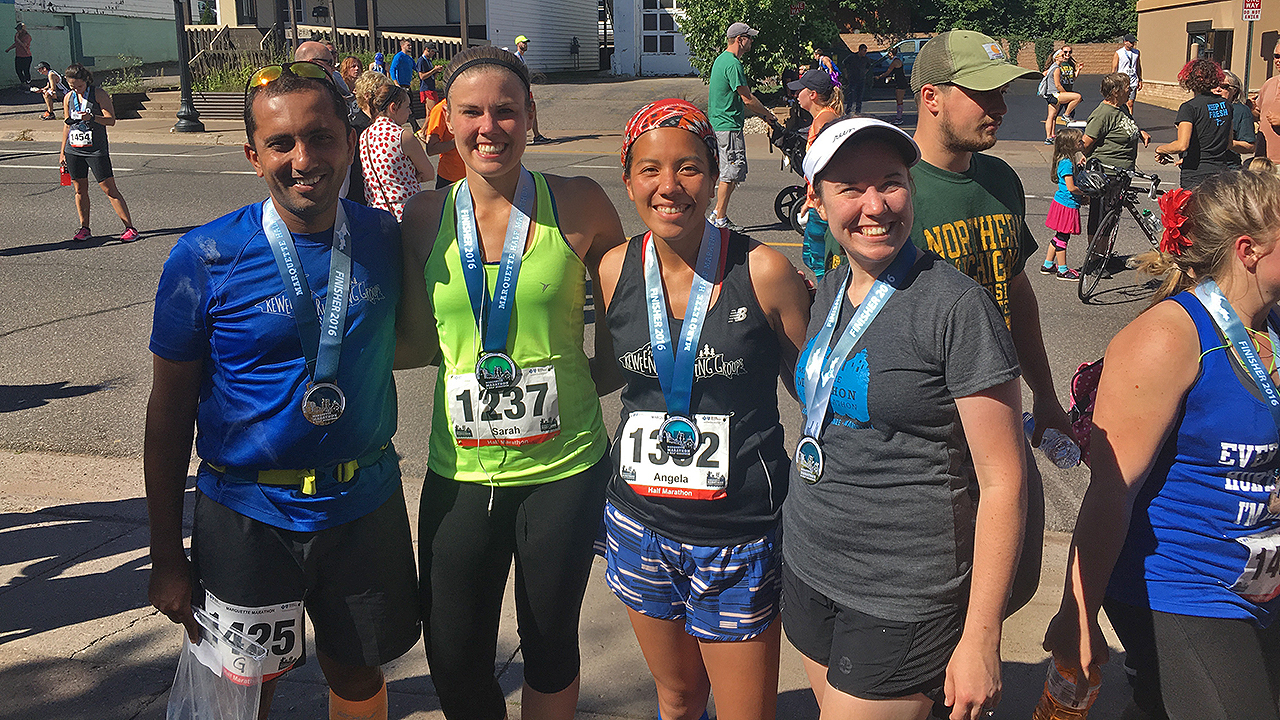 Fond memories of my maiden marathon attempt in its 2015 edition and not so fond memories of a squandered opportunity 300 some miles south a couple months later were still pretty fresh when I signed up for the 2016 edition of the Marquette Marathon. With this being the only chosen Marathon in 2016, all my eggs were in one basket so to say, and hope was that I would actually follow a training regiment to improve my PR. Maybe even bring it under the four hour mark.

Since the last race

As noted in Hancock Canal Run Half Marathon recap, practice and preparation have been on a less than satisfactory trend in 2016. Post-mortem of my performance in Canal Run revealed my running shoes being some two hundred miles past their prime, and a day trip to Queen City Running Company provided the needed therapeutic fix.

A few days after the Copperman Duathlon, just as I was feeling good about improvements from Runner’s Anemia and breaking in the new kicks, I rolled my right ankle during the weekly Keweenaw Running Group run. Swelling went away (or so I thought) and I stuck with the workout routine as usual a few days later. With Swedetown Trail Run being just a week before the marathon, I was hoping the 10k run would serve as one of the tapering runs. Taping the ankle myself (I am a doctor, although quite useless as you will see later), I ran the course with Andi. We finished the 10k under an hour … discovering along the way how different data collection and processing mechanisms in fitness devices can yield noticeable differences even for the same length, same course and at about the same time.

In light of the ankle injury, still not completely recovered on the lack of iron thingies and my inability in general to stick with the carefully chosen training plan meant that I’d have to be content doing the half marathon version instead of the full. Kelly and Sue made it a breeze to alter my registration status a breeze — a very kind breeze! The drive to Marquette was smooth and uneventful but punctuated with a pit stop in Michigan Iron Industry Museum in Negaunee, the starting point for the half marathon. A beverage at the Ore Dock Brewing Company with Angela, Brian, Kristin and Mark was followed by picking up the race packet. Shortly after chatting with Kelly, Sue and Ray at the pre-race expo, it was time to eat at the Graci (Kara and Sam Jr.) residence. Kara had cooked up a yummy and filling meal, and getting to share it with her as well as the Zieglers (Chandra, Erich, and their little ones — Emma and Hali) was the highlight of the evening before calling it a night.

The race morning came at a very reasonable pace, and first of the very steps I took let out a little pop from the right ankle. Dutifully ignoring it and caring not to wrap the ankle this time around (see, I told you, I am useless doctor), I headed to catch the bus to the starting area with Angela, Sarah and Kristin. The bus ride too was smooth and uneventful, and got us all to the starting area well ahead of time. The ankle pain, not significant but not unnoticeable either, showed up a few times during little warmup jaunts, and as before, I dutifully ignored it.

The gun went off on time and funneling approximately 450 people — though not all at once but in considerable chunks at a time — through the narrow pathways until the trail widens out has a lot of potential for ugliness and injuries. Snaking my way through folks while making a concerned effort to not wander too much off the trail to mess up the flora and fauna was tricky. But the starting rush would make for an awesome video if shot from air. The ankle pain increased sharply over the first three miles, and so did the thoughts of dropping out and hitching a ride back to the finish line. But I haven’t had a DNF against my name in any event just yet and this wouldn’t have been a good one to have it.

Once past the first five kilometers or so, the pain started to fade away and the course became mostly downhill. Coupled with shade offered by the trees along either side of the Iron Ore Heritage Trail made it easy to put Sir Isaac Newton be the guide and pick up my pace. Narrowly escaping getting hit by a carelessly driven car at the intersection of S McClellan Avenue and Washington Street in Marquette, in presence of volunteers and police officer doing their best to ensure course safety, wasn’t a fun experience.

I did stop at the aid station around the 10 mile marker as I had done at every other until that point. Protein-rich hydration pack was running pretty low by then too, forcing me to stop a bit longer to refill it with water. The ankle that was just fine for the past six or miles started stiffening up to an extent that I had to gingerly walk the next mile. Picking me out of the crowd around the 10.75 mile mark with a genuine look of a concern was dear friend Marie. She hopped onto the course, checked what was wrong and started running with me for over half a mile … IN HER NON-RUNNING SHOES! If not for her encouragement and support, I probably would have walked a whole lot more and taken a lot longer than 1:58:02 to cross the finish line.

Post-race activities included consuming some water, chocolate milk, etc., and running up later parts of the 3rd Street hill with Kara as Chandra finished her gutsy marathon attempt in not so favorable conditions. Sarah and Greg drove me back to the parking area about a mile or so away from the finish area, and after another pit stop at the Ore Dock Brewing Company with Angela and Brian, Sarah and Greg, and Kristin and Mark before heading back to Houghton.

The 2016 racing season has been quite a miserable one to say the least — finishing times for three events that I have considered as races (Green Bay, Canal Run and Marquette) have shown a monotonically decreasing trend. Much of this has to do with me not doing the small little things that I know should have done consistently but didn’t make enough time to do, and not paying enough attention to detail when I indeed do them. Hopefully, the ankle will heal sooner than later, and I can give it one more shot before the curtain comes down on 2016.

the opportunities, organizers, sponsors, volunteers, timing folks, law enforcement/border patrol/immigration officials, photographers, fellow racers, spectators, technologists with their creative electronic gadgets and tools, and my good friends in and outside of my community for the often unexpected, undeserved, unrewarded acts of constant encouragement, and offerings of constructive criticism, tested tips and tricks to improve myself as an athlete.

One Reply to “2016: Marquette Half Marathon”