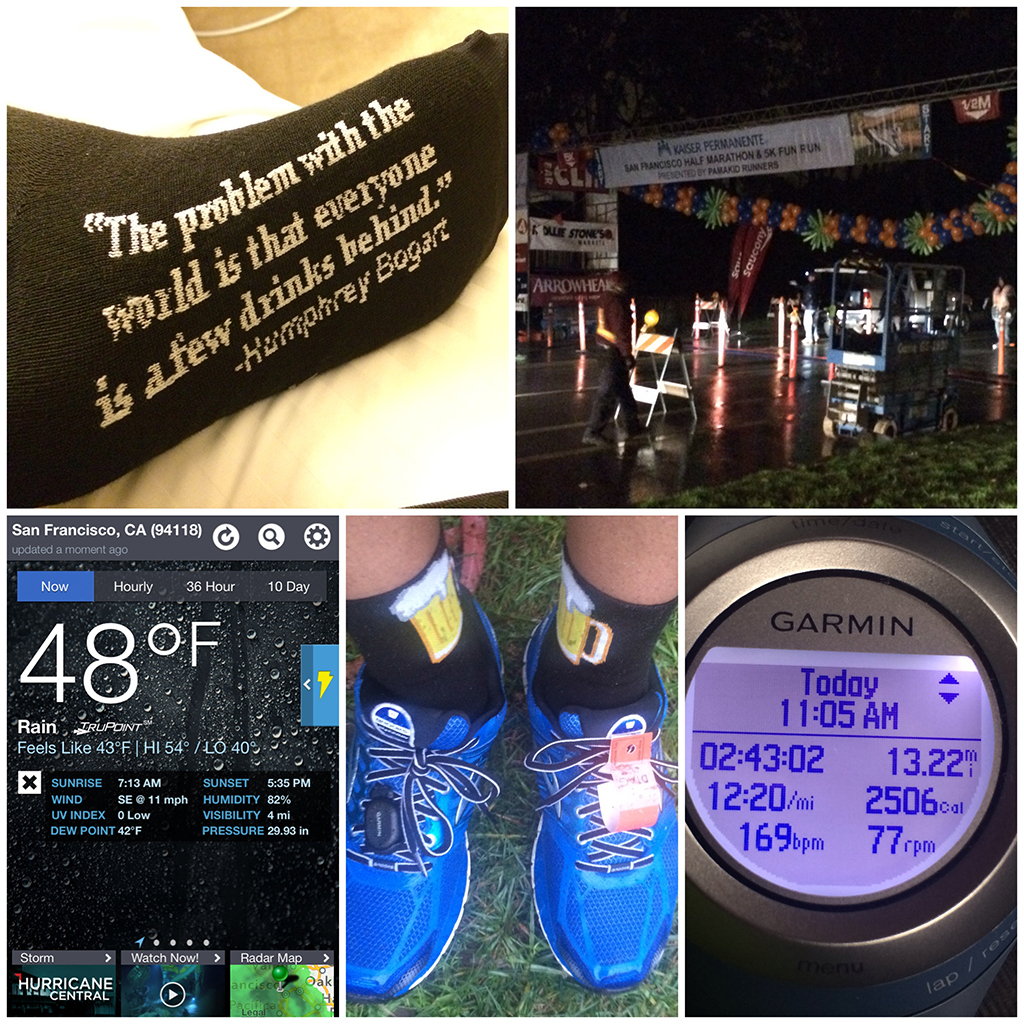 As noted in my looking ahead post posted several weeks ago, I had registered for several running events in 2014. I even made plans to procrastinate less and continue running through the winter in preparation for the 2014 running season. But old habits die hard, I suppose. I could blame the end of semester activities for sinking much of free time towards the end of 2013 and early first few weeks of 2014 but fact that I made time to enjoy more than several brewed beverages would invalidate any such claim to blame.

To put an end to couch surfing activities and pause finding more projects at work to stay 16-18 hours every day, I took up cross country skiing. My good friends — Sam Graci Jr., the Bunkers [Kris and Kate], Greg Reed, the Youngs [Amber, Christine and Michael], Andi Vendlinksi and Bryant Weathers — more than made up my lack of knowledge and/or experience in necessary equipment as well as skill set to get started with their gracious patience. Garmin Foot Pod that Santa brought me and the software I wrote helped me visually understand the need for improving cadence during my runs. Thanks be to the aforementioned folks and to members of team /var/run (Nancy, Josh and Amy), Dr. Suits, the Handlers (Christine, Rob, Shannon, Stephen), rest of the Vendlinskis (Jim, Rick), the Carmeans (Jess and Tim), Riccardo, Nils, the Watrous’ (Liisa and Matt), the Gracis (Kara and Sam), the Wilmers’ (Kelly and Stephen), the Lehtos (Tammi and Chris) for frequently dropping some of their knowledge on me with regards to techniques of running and/or skiing.

After having registered for the annual HPC Advisory Council‘s Stanford Conference and Exascale Workshop and having received confirmation that my talk would bring the curtain down on Day #1 proceedings, I started putting finishing touches on the presentation that’s been under preparation for little over a year. Taking the impending Polar Vortex II and potential travel delays as a consequence into account, I chose to fly out of Houghton couple days ahead of time.

As the said finishing touches were drawing to a close, I started looking for running trails and a 5k (or even a 10k) in the Palo Alto area. Google search brought me to Stanford Running Club. Expanding the search using Running In The USA to include the city of San Francisco lead me to 31st Annual Kaiser Permanente San Francisco Half Marathon and 5k Fun Run. Being the unfun loving guy that I am, it was relatively easier to ignore the 5k Fun Run, register for the half marathon and hope that travel from Houghton to the Bay Area would go as planned — smooth and uneventful and on time.

Few email exchanges with the organizers completed the registration and a few days later, I received the bib and the timing strap in mail. With a little bit of research, I found that

Founded in 1945 by industrialist Henry Kaiser and physician Sidney Garfield, Kaiser Permanente is an integrated managed care consortium, based in Oakland, CA. It is made up of three distinct groups of entities: the Kaiser Foundation Health Plan and its regional operating subsidiaries; Kaiser Foundation Hospitals; and the autonomous regional Permanente Medical Groups. With nearly 9 million health plan members, 170k employees, 15k physicians and 600 medical offices, Kaiser Permanente is the largest managed care organization in the US.

A bit more careful reading of the event website indicated that

Participation in this event helps support four major charities including Koret Family House, The Harbor Light Center for Alcoholism and Drug Abuse, Support for Families of Children with Disabilities and Meals on Wheels. Additionally, there are a number of smaller charities that also benefit from the fund raising efforts and those of organizations like American Red Cross to provide important Emergency Preparedness information to our participants.

In order to keep our registration fees low and donate more money to our charities, we will not be offering Finishers Medals this year.

making it slightly easier to achieve one of my own goals for 2014 — to run not for bling but for improving. A short chat with dear friend, Katie Wysocky (a long time resident of Bay Area until a short while ago), during her brief visit to the Yoop gave a much better idea as to what I could/should expect from this event (she did it in 2013, in 1:37:32 @ 7:27 min/mile). In order to make sure that I (or anyone else reading this) draw appropriate conclusions about my results, I chose to list every one of the training activities leading up to a race — from beginnning of the year or after the last organized event, whichever came later.

Personal goals for this event, in order of importance, were as follows:

Primary motivation for goal #6 was to bring fruition to the efforts of dear friends and team /var/run members (Nancy, Josh and Amy) last Fall to help me achieve a new PR. Secondary motivation was the opportunity to earn some bling from Sweat Tracker for beating the old PR.

A delayed (90+ minutes) in-bound flight the night before caused some not so happy moments but two seemingly miraculous flights later left me in San Francisco only 15 minutes later than originally scheduled — in spite of additional delays for in-bound flights, de-icing and longer than normal taxying owing to more than average snowfall in Chicago.

Forgetting my iPhone power adapter in the light turned out to be a very fortunate mistake: it made me look for an Apple Store in Palo Alto and the store manager was not only friendly but very knowledgeable in good diners. The said diner later became the final carb loading destination (and potentially more over the next many days).

I chose to arrive at the starting area a few hours ahead of the starting time — to make sure that there was enough time to beat any traffic jam over a 30+ mile ride. And so did the bone-chilling rain and winds at 5:30 am — even though the prediction pointed to a 20% chance around 8 am and increasing up to 60% by 10:30-11:00 am — refreshing not so warm memories of the Porcupine Mountains Trail Half Marathon and making the day more suitable for surfing than running. Given that it hadn’t rained much since March 2013 and that the area was in serious draught, I am sure it was more than a welcome relief for most parties involved. However, there’s a part of me that believes that timing of the rain (it hadn’t rained for days before nor does it look like it will rain for many days ahead) and the bone chills that came with it were more of a karmic butt kicking I deserved for quietly making fun of Palo Altoans complaining about sunny +55 F days as cold.

As can be seen from the map and splits below (speed, elevation, heart rate and cadence spectrum are a courtesy of Garmin Forerunner 405CX, Garmin Foot Pod and WP GPX Maps plugin for WordPress), the course was mostly flat or downhill, first several miles of the course took me through the scenic Golden Gate Park and colorful neighborhoods surrounding it, and then many more along a rather rowdy-looking Pacific Ocean.

First 6 miles or so went really well (1:07:21 at 10:51 minutes/mile) and the next 6 went fairly well too — didn’t yield to the side stitches, maintained a good cadence, hydrated and electrolyted well, stayed away from striking heals and walked only through the aid stations. I do remember feeling a bit dizzier and/or delirious between mile markers 12 and 13, striking heals, having to walk about every other tenth of a mile towards the end, and such. The finish area seemed well below par and less festive as well — compared to Hancock Canal Run or Madison Half Marathon — probably owing to the colder weather. Comparing the results with the goals I had going into this event, I

Thanks be to the organizers, first responders, medical staff (Rick and John of EMT — for the blanket to stay warm for about 2 hours pre-race and enough vaseline to minimize the impact of rain during the race), San Francisco Police Department, plethora of volunteers [individuals and running clubs alike — Golden Gate Running Club, San Francisco FrontRunners, …], vendors and more for making sure the event went as smoothly as it did. Thanks also be to Diane of RhodyCo Productions for saving me a dry wick shirt, a random couple that reminded me that I could call for a cab ride from my phone that was in my hand, the cab driver that let me change out of soaking wet clothes, Dave of Tazza D’AMore for the soul warming chai, CalTrain crew for letting me stretch my legs all the way to Palo Alto, for the opportunities that came along my way and all the fine souls that helped me be just another face in the crowd, and in turn helping me learn more about myself in this biggest of the big city half marathons I have been a part of to date.