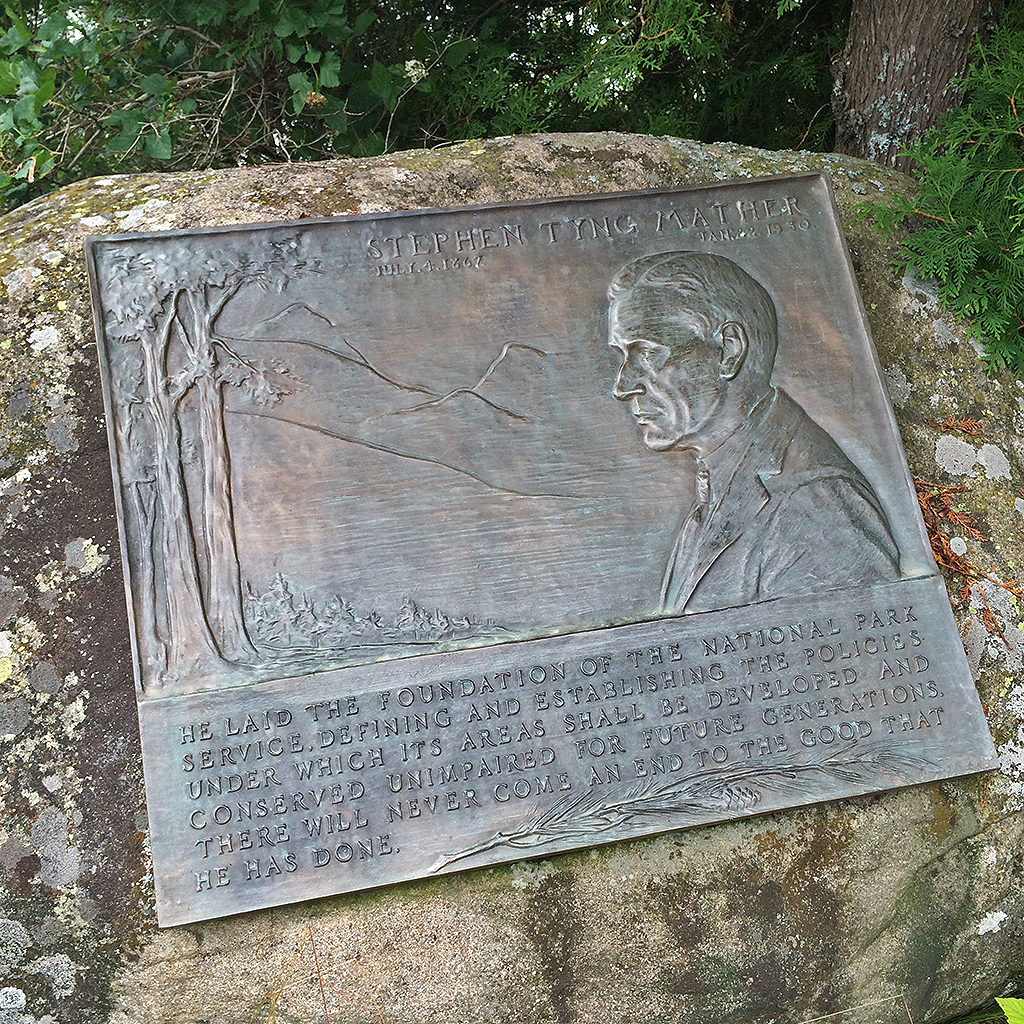 From time immemorial to first week of May 2010, Isle Royale National Park was something that just existed in signs (boats, roadside and in Houghton county airport), in others’ travel journals hidden in the far — and sometimes dark — corners of the internet, in photographs, and often as a figment of my imagination. And one day, in a fine watering hole that a bunch of us frequented with more regularity than the winter of Yoop, dear friend Jaime asked Nils and myself if we’d be interested in going to The Island as part of the Queen’s crew. I don’t recall neither Nils nor I neither thinking nor flinching before saying yes (well, it was more like YES!). 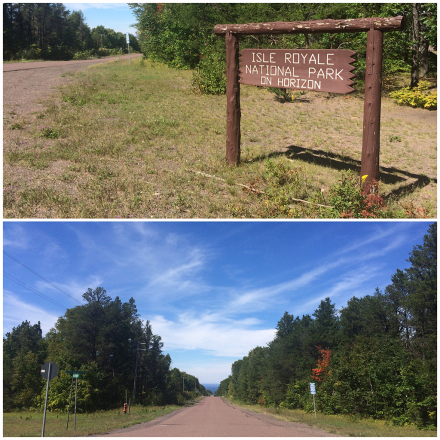 The 2010 edition of Isle Royale National Park involved a wobbly ride aboard the Isle Royale Queen IV from Copper Harbor, two nights of camping and about two days of hiking — which took myself and Nils to Scoville’s Point, Suzy’s Cave, and thanks to Jaime ferrying us across the Tobin Harbor in his fishing boat, Lookout Louise — sighting of a Canadian Blue Jay, a fox, a rabbit and evidence of Bull Moose activity but barely any other human being or bugs, and a ride back on an optically flat Lake Superior aboard the same vessel.

For the next many moons, Isle Royale National Park remained fresh in my memory, and since 2012 for many more moons, I found satisfaction in viewing the landscape of the said national park on what undoubtedly is a majestic eye candy at Michigan Tech — at least when it comes to research computing and visualization: a set of twenty four 46″ LED monitors at 240 Hz, powered by a computing cluster, acting in unison to provide a stunning 50 (yes, fifty) megapixel screen resolution.

On what I remember to be a mix of sunny and gloomy Spring day in 2013, and what I surely remember to be a time in my life when I didn’t know how to take time off from work for myself, dear friend Joanna suggested that I watch a Ken Burns’ documentary: The National Parks, America’s Best Idea. 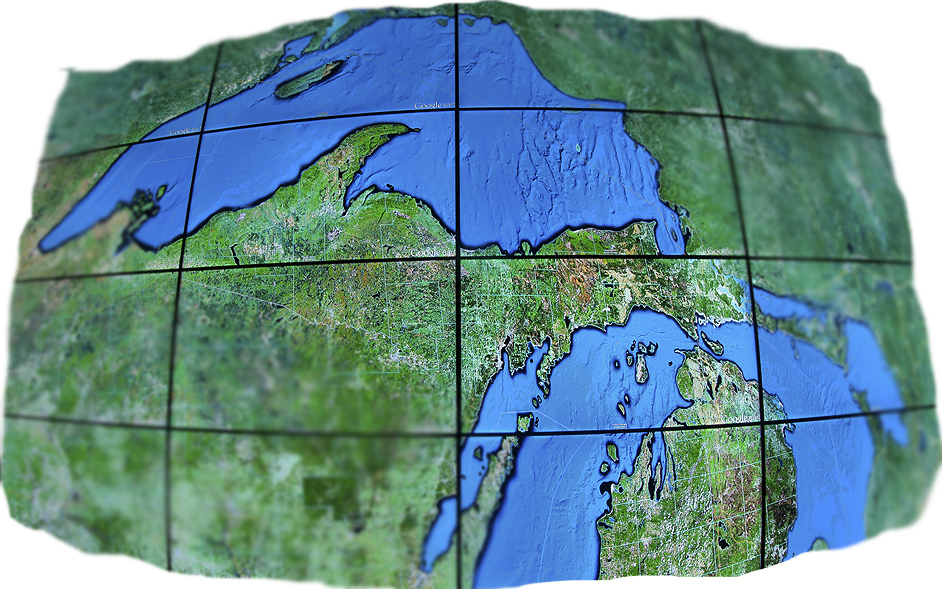 I knew of Ken Burns from the Ken Burns Effect from dabbling around in photography for many a years. I also had seen bits and pieces of the suggested title, and assumed that the documentary in its entirety would last an hour, two at the most. I was wrong — so blissfully wrong about the length of this documentary. I cooked up some food, sat in front the television and just before hitting the play button, cursing why on earth are there six episodes, and why on earth is each episode nearly two hours long? All I do know is that hit the play button for episode one, and next thing I knew was I still sitting in the same seat — not counting occasional visits to attend the Nature’s call, and putting more food on my plate — 10+ hours later wondering why on earth are there only six episodes, and why on earth is each episode only two hours long?

I have since then watched a fair number of documentaries that Ken Burns has created: The Civil War, The Dust Bowl, Jazz, and more. I do have to admit that I have seen National Parks at least two dozen times (I even have it on my Mac, bought via iTunes, and see it at least once a month) with Baseball being a distant second with only five complete viewings. All I can say is that Ken Burns can tell a story, make one sit and listen to/watch him tell the said story, and show that one plus one is three — that is to say, he makes sum of the parts look bigger than the some of the parts.

Some time in the later parts of July, I happened to come across Vacation Races, and noticed that one of their races was NPS Birthday Run — a run celebrating the birthday of the National Park Service. It didn’t too long to sign up for this virtual race, and plan on doing the run in Isle Royale National Park. The reasons were many:

As with training, there wasn’t a whole lot of time since the recently concluded Ragnar Relay Great River with 200 Miles of SISU. My hopes of recovering quickly from its aftereffects were dashed as I went through just about every post-Ragnar symptom as described in the RAGMAG: extreme exhaustion, the feeling that you can accomplish anything, desire to continue running, and the need for high doses of caffeine. Runners who experience a Ragnar have also experienced an extreme desire to run again, followed by unexpected and spontaneous slap bracelet hand offs, getting up randomly at 3:00 am to run their leg, and may even include a need to spend hours in a smelly van. Even after a week, my eating, sleeping and running schedule was off by quite a bit from what I have been used to in the past couple months.

Taking the second half of Friday off from work to pack the necessities turned out to be a good idea — especially since part of the Saturday would be spent attending the wedding ceremony of dear friends Sarah and Kevin, and getting to see a good number of my good ole friends in Ishpeming. The drive up to Copper Harbor on Saturday evening was punctuated by a pit stop at The Fitz, and a quick visit to the Brickside Brewery prior to calling it a night in Jaime’s cabin. The ride aboard Isle Royale Queen IV from Copper Harbor on Sunday morning was just a bit wobbly. I got on the vessel knowing no one except the captain but got off in Rock Harbor knowing one guy from Detroit, one couple from Canton, MI, and four more Cantonites who happened to know my dear friends, Greg and Kate, very well.

Having gone through the DOs and DON’Ts on the island and received a permit, I set up the tent in Rock Harbor Campground, and having grabbed a quick bite to eat at the Greenstone Grill, I headed towards Scoville’s Point. Frequent stops to read the signs along interpretive trail, admire the surrounding wilderness, take several photographs, and adopting the longer route back via Smithwick Mine took close to 2.5 hours. While waiting for dear friend and Park Service Ranger, Lucas Westcott, I happened to read just about every posted sign in the visitor area — and for what it’s worth, it turned out to be a very good thing. One of the said signs talked about the expected thunderstorms overnight, and I wasted little time in packing up my tent, and settling down in one of the empty sheltered cabins in Rock Harbor.

Following the exchange of pleasantries and chat with Lucas, I ran a for a short while — coursing the trail I had hiked about 90 minutes ago in reverse direction — hoping that my legs would be better acclimatized to the rocky conditions for the next day’s 10k. A pasty dinner at the Greenstone Grill was followed by meeting more friendly folks in Rock Harbor Guest House, and I succumbed to sleep not too long after the Sun went down waking up only once, around 1:30 am, to watch the sky being lit up with the expected thunderstorms.

Taking suggestions from Don Kilpela, Jonathon Shafer and Lucas Westcott, I chose to run along the Rock Harbor Trail to Three Mile Point, cut across to Tobin Trail and take the Tobin Trail back to Rock Harbor to complete a 10k loop. The Rock Harbor Trail to Three Mile Point was about as hard as each of the three gentlemen had warned me about, and overnight thunderstorms added to the difficulty: thick fog over the lake, slippery trails and rocks made traction a thing of fantasy and luxury. Not paying close enough attention to the signs — in hindsight, it was lot easier to miss since my eyes were glued to two feet ahead of my feet — meant that I missed the sign for a trail that would connect to Tobin Trail. One extra mile these days isn’t that big of a deal but on this day, it was. Though the couple from Canton told me exactly where the sign was, I almost missed it again. But once I found it and once I got over the rocky hill to Tobin Trail, life became a lot easier. The run also involved quite a few slips and two major falls along the Rock Harbor Trail — one landing on my right elbow and the other on my right hip — and it was no coincidence that these falls occurred just around the time my head was painfully egotistical and full of myself. 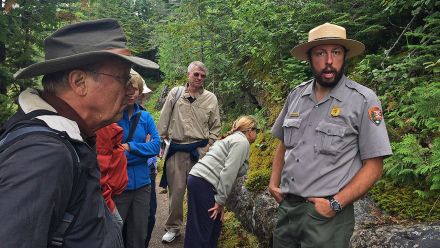 Post-run activities included a guided walk around the harbor with Lucas Westcott — the narration all along was not only interactive and informative but was accompanied with quite a theatrical performance, making the often dull topic sound very interesting. The return journey was wobbly and foggy for a bit aboard the Queen but made way for warm, sunny and blue skies as main land came into sight. Drive from Copper Harbor to Houghton had few more pit stops — the end of US41, Brickside Brewery and The Fitz — to ensure a stranded couple from Minnesota got to experience as much of the valuable entities in Keweenaw within the available time.

The timing and logistics of this event — much to my own design — don’t leave a whole lot of time and room to train for the upcoming Marquette Half Marathon. But I am quite hopeful that five miles of hiking and 12 miles of running in Isle Royale National Park will have strengthened my legs, and will pay some dividend few days down the road.

I was happy to learn that the photo I posted was a winner in most festive photo category in the social media contest associated with this event, earning me a National Park Pass as the prize. Thanks be to dear friend Lucas’ smiley face that made the photograph look so festive!