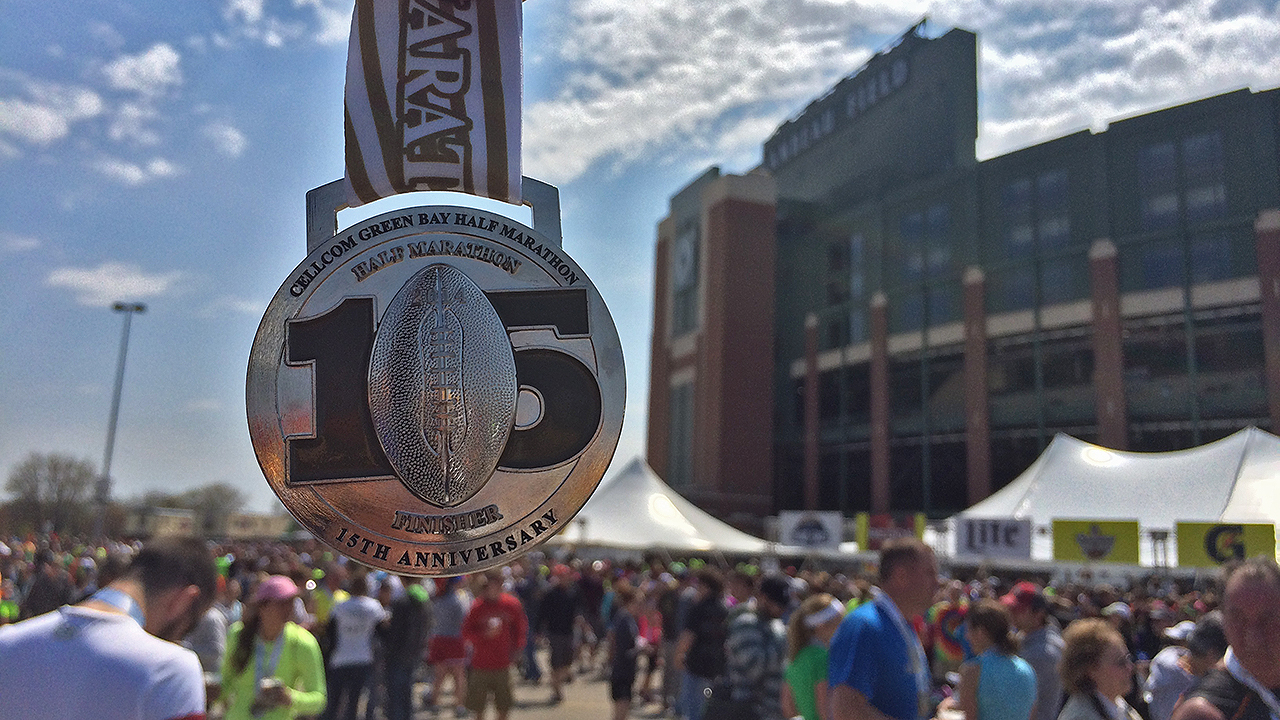 As I noted in my previous entry, Door County Half Marathon, and in Looking Ahead for 2014 a while ago, partaking in the Cellcom Green Bay Half Marathon wasn’t necessarily a part of the plan when the 2013 running season ended, and when planning for the 2014 running season started. 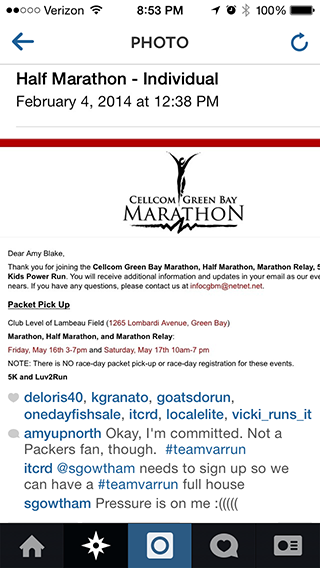 As disappointed as I was that things didn’t work out the way I had planned and that I couldn’t run the Journey’s Half Marathon, I couldn’t be more happier for the then lack of hindsight: for a delayed chafing [WebMD and Wikipedia] attack pretty much grounded me for ten days, until about 24 hours prior to the start of the race.

Long before I forgot to (or didn’t realize that it was important to do so) apply Body Glide and paid dearly for it, members of team /var/run had taken turns in a very conspicuous way — one that would put all of Dallas Cowboys’ conspiracy theories to shame — to progressively motivate me to sign up for the Cellcom Green Bay Half Marathon: Amy used the social media while Nancy used the historic Lambeau Field (home turf of a 13-time NFL champion pro-football team that I own), and Josh used the football shaped finisher medal that I’d get to earn.

All this peer pressure combined with a rare opportunity to run through the holy Lambeau Field, potentially earn a PR owing to flatter course, and test out some of the hitherto unvisited watering holes in Green Bay area (Titletown Brewing Company, Appleton Beer Factory and The Keweenaw) got me to sign up about three months before the event.

Though I paid dearly for the lack of Body Glide application, the lessons learned were painful, invaluable and unforgettable. Given that my outfit, running shoes and the terrain had all stayed about the same between training runs and the race run, discussions with friends from the Keweenaw Running Group led me to believe that the shortened stride could have been the a major cause for chafing. 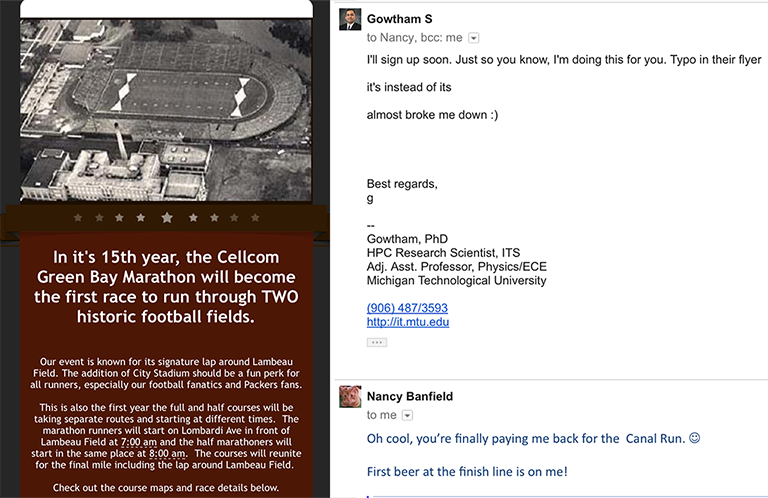 While there were no training runs of any length since the last event, my legs stayed active thanks work outs suggested by dear friend, Rob Larson. And thanks in great part to few half-a-day hikes in the Yoop’s wilderness lugging around heavy camera gear, my heart stayed a bit more healthier as well. One such hike provided clear evidence for pregnant women, often pushing strollers, running faster than I did/could just by myself in some of the previous races. 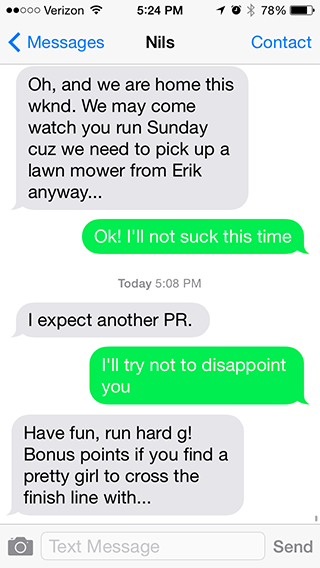 The drive down to Packer land was smooth and uneventful on Saturday. Had I paid attention to the pre-race expo timing, I would have planned my haircut appointment a day or so sooner (gotta have an aerodynamic head, right? Aerodynamic body is a whole another project) and left Houghton as early as possible. Lambeau Field Atrium served as the venue for the biggest pre-race expo (Prevea Health & Fitness Expo Packet Pick Up) that I have attended to date, and a brief hang out with a good ole friend, Josh.

Having eaten (home cooked baked ziti) and rested well the night before in the cozy confines of dear friend Sarah‘s home with Erik, I woke up to the nightmare that race had started while I was still in bed. The bright sunshine peaking through the blinders didn’t help my cause either, making the nightmarish dream look a awfully close to a reality. Fortunately, it was only 5:30 am giving me plenty of time to recover from the shock, get ready, and get to the arena with plenty of time to spare.

It was a very pleasant surprise to have run into more good ole friends — Sarah, Kevin, Katie and Matt — on my jog into the arena. A few pre-race photos with team /var/run and dropping our belongings with the gear check (which, I must say, was supremely well organized using a number of school buses), we were off to the starting area.

With nearly 6,000 completed racers (with an almost 2:1 ratio of women to men), this event turned out to be the biggest of the big city races I have used the opportunity to be a part of. It took that large of a crowd a few moments to realize that the national anthem had started. But once realized, it was pretty darn quiet and the only thing that could have made the whole experience greater was a fly over!

I chose to start with the 2:10 pace group and see how far/long I could keep up with them. It took about 2 minutes past the gun time for me cross the start line, and another mile or so before I had an arm length worth of space around me. 2:10 pacers were long gone by that time. Given the lack of training runs, plan A was to treat this mostly flat half marathon course as a combination of four 5ks punctuated with recovering walks/jogs. I was starting to feel the burn at the end of the very first 5k and plan A disappeared into thin air.

Plan B was, then, to treat the race as two 5ks — one at the beginning and one the end — and do interval runs in the middle. This plan seemed to work at least till about the 10 mile mark. Sunshine and cloud cover and gentle breeze took turns, sometimes at two of the non-mutually exclusive ones, playing hide n’ seek throughout the course. And the mercury slowly but steadily seemed to raise as well.

With a PR (sub 2:33:13) still within reach around the 11.50 mile mark, I started seeing stars and feeling a bit dizzy. Having seen at least couple other fellow runners needing medical attention (probably) owing to similar conditions, I chose to put my ego/pride aside and ask for some fruit from one of the spectating households.

If not for the kind hearted lady offering me a plateful of freshly cut strawberries, blackberries, thimbleberries and blueberries, and a bottle of water, I would imagine chances of me finishing the race were slim to none. With that, plan B also disappeared into thin air and plan C was just to find a way to finish. The last quarter mile or so involved a lap through the holy Lambeau Field at the ground level (GPS tracks indicate otherwise) — an awe inspiring experience that’d be very hard to forget any time soon!

Given that the longest *training run* was between the parking lot and Lambeau Field Atrium on race day, I shouldn’t be complaining at all about the results I got. And as bad as the 2:36:52 finish felt at that time, 12+ hours of analysis did bring quite a few positives to light: the opportunity to be a part of the biggest race yet; the random opportunity to start the race with a gentleman that had run in all previous 14 editions of the race; no hint of side stretches through out the course, thanks to additional muscle relaxers consumed around the 7 mile marker; the highest number of cheerful spectators — mile per mile and block per block — compared to any other previous event; opportunity to run a lap through the Lambeau Field at the ground level; remnants of upper respiratory tract infection and chafing not playing a spoilsport during the length of the run (thanks to Rob‘s timely tip of extending the stride by a few inches); having dear friends Nils and Chelsea along the course, then inside the Lambeau Field, and Sam, Nils and Chelsea immediately past the finish line; learning the importance of training, value of Body Glide and not to be too proud to ask for help when necessary.

A plethora of (processed) information sent periodically from the race organizers in the form of First Timers Newsletter was also of immense help to learn many tiny little things that could go a fairly long way for longer runs, and support all along the course from fellow racers, organizers, volunteers, photographers, vendors, sponsors, spectators and friends made for quite a memorable experience. Far be it from me to judge those racers who ran to their own music, but I do believe such runners missed out — at least to some extent — on experiencing the awesomeness of spectators lined up pretty much through out the course. And it just wasn’t my own opinion — my Iron Man buddy, Nils, echoed the same feelings as well!

Post-race activities included a warm shower sandwiched between two feastings — one with Chelsea and Nils in Sideline Sports Bar, and the other with Nancy, Josh, Amy, Scott, Sophie and Aaron in Titletown Brewing Company — and lazing on the couch at Sarah’s place. After another night of good sleep and rest, the return drive (started after a quick walk through the Lambeau Field, Spiced Chai Latte in Curly’s Pub, and a brief chat with dear friend Matthew Becker) to the Yoop was about as smooth and uneventful as the drive down to Wisconsin.

With half a dozen half marathons in the rear view mirror (average speed plotted below), the reasons and explanations for the lack of required level of progress have been quite simple and straightforward: not making make more time to run regularly, and not having enough *experience* miles in the bank to cash the check on race day. I should probably find a way to permanently engrave Lombardi‘s words, you don’t do things right once in a while, you do them right all the time, as applied to running, in my brain so that they keep kicking me in the rear.