It has been another two weeks since Hodag Run – a 10k race in Rhinelander, WI, the heart of the Hodag Country. Preparations for this one were just like that for Hodag Run – apart from (minimal) running around of bases in softball and/or at work, I didn’t make time for any. 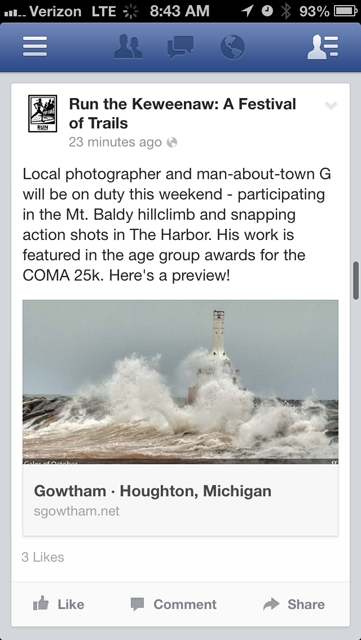 Several moons ago, dear friend Amy (@AmyUpNorth) and I had been talking about running in all three events of Run The Keweenaw, A Festival of Trails (@RunKeweenaw). While I continued to talk the talk, she continued to walk (or run) the walk and train as well as she could.

My mind, that often looks for excuses to not run, found a glorious one – when Michael Young wondered if I would be interested in photographing the race – or so it thought. When I said I’d rather photograph the races than run in them, the coach in him put it in no uncertain terms that I couldn’t use the opportunity to photograph the event as an excuse for not running in (at least one of) it. He was even gracious enough to accept my application well past the normal deadlines. And of course, once it went on Facebook, I was committed at all levels to participate and complete the Mt. Baldy Summit Run.

Carrying on the lessons learned in Rhinelander – sleeping and eating on time, and keeping alcohol consumption to minimal quantities, and hydrating well – seemed to have paid rich dividends. No sooner did the race begin than the sunshine made way for a pleasantly surprising cloud cover but not so surprisingly (and deservingly so) I found myself at the very tail end – being passed by fellow human beings of just about every age group, shape, size, health and physical & mental capacity. And a little while later, the course left the paved roads of Eagle Harbor township and entered the trails managed by The Nature Conservancy.

Still running in the same cushiony pair of shoes (thanks to Nancy and Josh), sandy trails in the beginning seemed bad and a neat little creek to run through offered some respite. While rest of the course made it seem like it was an ascension to hell, friendly faces and cheers along the way — capped off with more friendly faces and cheers at the top — made every single (painful) step worthwhile.

If there ever was a race, that I had taken part in, that makes one feel like the effort in itself is the reward, and then further rewards one with an incredible and unparalleled view of the Keweenaw peninsula, including that of lush green series of mountains on one side and of the Lake Superior on the other — Mt. Baldy Summit Run is pretty much it. This summit, in the process, became the first ever natural venue that I had run/raced to before ever having hiked it.

Timing was a courtesy of RaceSplitter, and my pace throughout the race was very erratic — as indicated by the speed and elevation spectrum below (thanks again to RunKeeper app on my iPhone and WP GPX Maps plugin for WordPress). With an official time of 00:50:48, I finished (dead @%$&ing) last in my age group and amongst all males. Several sips of water offered by a dear friend and volunteer, Howard Haselhuhn, not only made up for my lack of reading the race instructions carefully but provided enough energy to run almost all the way down to the town with Amy (@AmyUpNorth).

Rest of the weekend

Saturday included photographing 2k Junior Trail Run and Copper Harbor Trails Challenge in Copper Harbor, followed a fantabulous farewell dinner at The Fitz (@FitzRestaurant) for a dear friend, followed by first camping experience — in Copper Harbor — in many many moons. Sunday morning brought along more photographic opportunities: 25k Carl Olson Memorial Adventure Run, some half way up the Brockway Mountain off a cliff, and some more in the woods by the finish line. As awesome as it was to have some of my photographs be used as a prize for the longest of the runs in this festival of trail runs, it was even awesomer to see one of the racers (same guy that did the somersault in the above video to keep me entertained) not only wait for couple elderly racers to catch up to him, but keep the said elderly racers ahead of him and finish behind them!

I still am quite sore even after about 36 hours of completing only the first of the three runs (and a little bit of running around). God bless those who ran all three segments — amounting to nearly 27 miles of hill climb and trail run of various proportions. I’m eagerly looking forward to the 2014 edition of this event, to run in more than one segment, to re-connect with the new friends I made, and make some more. Hopefully this and all the previous races so far will have helped me prepare for the upcoming (my first) half marathon as part of 38th Annual Canal Run next weekend.