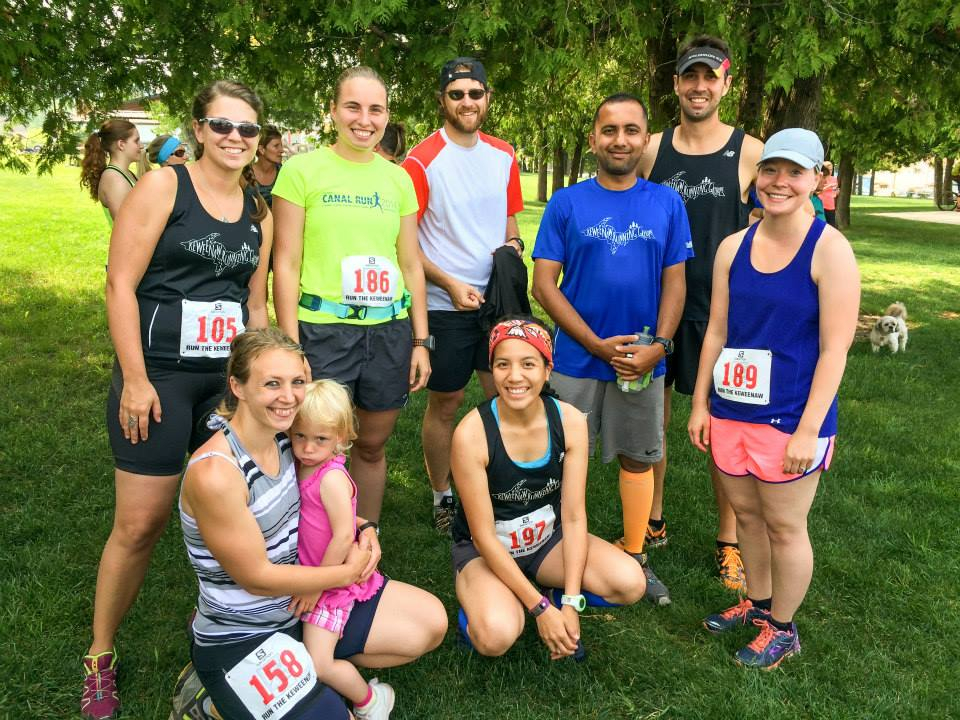 Run The Keweenaw, A Festival of Trails marks the first multi-part running event — trail or otherwise — in its entirety that I have had the opportunity to progressively and continuously build an additional stage each year. The last two editions of this event, 2013 and 2014, had gone on to teach me quite a bit about myself, bringing in me touch with a plethora of wonderful people from around and outside the region, and making the uphill portions of Hancock Canal Run course the week after seem flat or even downhill. 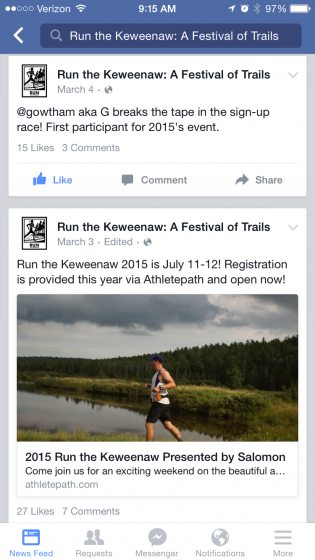 So, making the 2015 edition a part of the list of planned events was a no brainer, and neither was signing up for it as soon as the race director (and dear friend) indicated that the registration was open. Given my current skill set and the number of base miles of this kind invested so far, this will be the closest I come to breaking any tape for quite a while.

Slowly but steadily increasing RICHARDness of Lake Fanny Hooe Resort & Campground folks over the past few years, the think-tank of Keweenaw Running Group floated the idea of increasing our happiness by staying in Mariner North cabins. I royally screwed up securing the reservation at the latter location (yes, I had ONE task and I couldn’t do it), and the resulting need — as it almost always tends to do: make us a poor judge of talent and/or give hope when there ain’t any — forced us to revert back to the former (mediocre) option one more time.

The drive to Copper Harbor on Friday afternoon was smooth and uneventful. And so was picking up race packets for many of the KRG participants and pitching my tent in the aforementioned location. Dinner at the Mariner North (with Andi, Catherine, Christine, Jim, Lewis and Stephen) was soon followed by a walk around the pond. And a brief gathering around the campfire was soon followed by a rather successful attempt to catch more than forty some winks.

Waking up well before sunrise to the chirping of birds and getting to see a glorious blob of orange rise over the Lake Superior were the pleasant highlights of the morning before the RICHARDness of Lake Fanny Hooe Resort & Campground folks reached a new low. Like last year, Jim and I left for Eagle Harbor, and got there with plenty of spare time to warm up, meet good ole friends, make acquaintances with new ones and exchange pleasantries.

The event started on time, and I was able to stick to the goal of not walking except through aid stations for a hair over 2.50 miles up Mt. Baldy. The last mile or so saw me walk a few times: some of it entirely due to my will power (or lack thereof) masked under the excuse of saving the legs for rest of the weekend, and lack of course memory resulting from lack of repetition in this course; some of them to ensure the coughing runner behind me (I couldn’t really see her/him) wasn’t in need of any medical help. Completing this phase with a decent big push — under watchful eyes and cheerful friendly faces — in spite of sunny, warm, muggy conditions was a good feeling. And so was getting to see Nature’s grandeur from the top with many a dear friends.

While Jim and I were on our way to Eagle Harbor and running up/down Mt. Baldy, Andi, Christine and Stephen had wrapped up the tents in Lake Fanny Hooe Resort & Campground. Stephen had talked to Lynette and Matt, and made arrangements for camping on their property only a mile away from downtown Copper Harbor. The Principle of Conservation of RICHARDness (or may be even The Law) is probably a real thing after all — for every act of RICHARDness, Nature offers an act of ANTI-RICHARDness of approximately equal magnitude albeit at a (slightly) different time.

Post-6k and pre-14k activities included walking/jogging down with Mark and Kelly, food and awards ceremony with most of the participants, an uneventful drive back to Copper Harbor, packing up my tent and canceling the reservation for Saturday night, consuming few Advil tablets as a preventative measure, settling down in Lynette-Matt camp, lunch along the Lake Superior shores in Hunter’s Point (with Andi, Catherine, Christine, Cindy, Jim, Lewis and Stephen), re-activating the iPhone with Verizon (thanks to Copper Harbor Visitor Center and its wireless network, and the lady-in-charge’s willingness to share the credentials), hiking to the eastern tip of Hunter’s Point with Maggie, and learning about her projects and the act of writing successfully funded/fundable research proposals.

This event too started on time, and once in the shadows of Brockway Mountain on the other side of US41, pacing with a fellow runner under the assumption that she was running 10 min/mile pace instead of paying attention to my watch left much to be desired of my decision making skills. Garmin’s HRM Run put on an equally miserable show by consistently dropping the signal. Just as in the morning Mt. Baldy run, I did walk a few times other than through the lone aid station. While the heavenly downpour a couple hours prior to the start was a welcome relief from the scorching sun and its warmth, it made the conditions a bit more muggy and humid but most of the course remained dry enough to keep runners from slipping and injuring themselves.

With the Garmin showing 65 minutes for the first six miles, the goal of completing the run in under 90 minutes seemed out of reach for a while. Timely consumption of Honey Stinger Gold Gels coupled with watchful eyes and cheerful friendly faces (latter more so than the former) again helped dig out a second wind with enough energy to sprint the last 2.50 miles (I am quite sure one of the miles had a personal best time for trail running) and cross the finish line with about two minutes (and barely any energy) to spare.

Post-14k and pre-25k activities included awards ceremony with most of the participants, nerdvana and dinner with the Madison crew in Mariner North, consuming few more Advil tablets as a preventative measure yet again and calling it a night in one of Lynette-Matt camp’s cabins. Sunday morning came at a reasonable pace with chirping birds and insects after sleeping like a log through the night and with a cup of strong French-pressed coffee (thank you, Lynette!).

This event, like the other two before, started on time as well. Having never done this before and having only seen portions of the course in 2013 and 2014 while photographing the runners, I depended very heavily on the collective wisdom graciously passed on by dear friends — Jim, Mark, Mike, Rob and Stephen: to take it easy and be slow but disciplined during ascents, and make use of the flats and descents to keep the desired overall pace. And it all did come in very very handy — without them, I would have very likely gone out too strong and burned out before even making it to the first aid station.

I started out by following dear friend Leah for about 2.50 miles — about halfway up The Flow — every passing switchback brought runners that much closer to the tree line and offering an expansive view of Lake Superior. Having seen many runners in previous years take their time in aid station #1, I too spent a few minutes refilling my almost empty hydration pack before starting the sprint down On The Edge. My lack of attention to detail and not doing the small little things right showed its ugly head at a very inopportune time: I didn’t care enough to close one of the two bottles in my hydration belt completely and correctly, and as a result, it was nearly empty within the first mile past the aid station. Balancing the remaining distance (about three miles) with remaining ration required slowing the pace down considerably much to my disappointment and I ended up losing 5-7 minutes before reaching the aid station #2 at 8.50 mile mark. Garmin’s HRM Run continued its own miserable performance consistently dropping the signal for remainder of the course.

Another couple minutes in aid station #2 to refuel, and carefully and completely secure the hydration pack made way for a slow climb up the Stairway To Heaven towards the Keweenaw Mountain Lodge. Following Leah from about 9.50 mile mark nearly to the end through aid station #3 and keeping sufficient enough distance between us to be safe turned out to be a good decision. Aid station #3 was the first such stoppage in all my races so far where I needed a volunteer’s help in refilling my hydration pack while refueling with one half a banana. As technical as the Red and Ma Maki Trails are/were, sprinting down without the risk of bodily injury wasn’t a feasible option. Not wanting to be a RICHARD myself and not completely aware of the running etiquette yet, I did inform Leah that I’d pass her to sprint to the finish line. And watchful eyes and cheerful friendly faces yet again provided the necessary motivation to dig in for one last big push — helping me cross the finish line well under the 3:00:00 mark: a surprising 40 seconds/mile faster than the goal pace.

Post-25k activities included a refreshing shower using the newly instituted Bike Wash (thank you, Stephen!), eating delicious food and making a mess in The Pines Resort, awards ceremony with most of the participants (I was once again fortunate enough to have had some of the photographs chosen as awards for COMA 25k Run), and receiving the Average Joe award [and in the process, joining the elite club of Christine Van Asten (2013; thanks be to Riccardo for the correction) and Mark Mehler (2014); somehow, Mark had a hunch that I stood a good chance of earning this award 16-18 hours ahead of time!].

The fruition of goals — especially #03, #06, #09 and #10 — came as quite a surprise and a year or two too soon, and the absence of some of the regulars and far far superior athletes (Christine and Scot Van Asten, Mark Mehler, Riccardo Tortini, and Shannon and Rob Handler) due to life, sickness, migration, tendinitis, etc., certainly played its part. I am quite sure I missed them, and I am equally sure the race and many other racers would echo my feelings as well.

Post-race activities included packing my stuff up from Lynette-Matt camp, drive to Eagle River contemplating on the lessons learned over the weekend — finding other ways to be useful when I can’t do something I love, and doing so without whining and with grace and a smile; the good fortune of sleeping in a comfortable cabin and its impact on the COMA 25k Run; need for more discipline, attention to detail and doing small little things right every damned time; need for finding methods to generate a second (or even third) wind especially in the absence of watchful eyes and cheerful friendly faces; improving techniques to pick up the pace after having stopped briefly at an aid station; a better admiration for fellow racers and their stories; feeling of running free without worrying about things that have been a constant fixture over the last eight months; need for deliberately practicing these courses at least a couple times before the 2016 edition …, a pit stop in The Fitz for a meeting with the Earl of Brixom and some black bean hummus, forty winks in the neighborhood of Jacob’s Falls, a return trip to The Fitz for dinner with Kelly and Mark, and an eventual trip to south of the bridge to call it a night.